Defending champion Florida State is headed back to the Women's College Cup for the fifth season in a row with a 5-0 win over Texas A&M on Friday in Tallahassee. The shutout extended the Seminoles' scoreless streak to an NCAA record 900 minutes as they have not allowed a goal in their last 10 NCAA Tournament games. 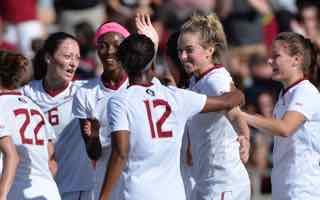 Florida State got two goals from Icelandic star Elin Jensen and three assists from fellow freshman Kaycie Tillman as it scored twice in the first half and added three second-half goals.

“It’s clear to me that our group has a very good focus and high level of concentration,” said FSU head coach Mark Krikorian. “We have an awful lot of talented players that have bought in to whatever game plan it is we come up with. I thought our group was very good, very sharp in defending the attack. Certainly, Texas A&M is an outstanding program and for us to be able to go out and win a game like we did today against such a good program is great for us”

The shutout allowed the 'Noles to surpass North Carolina’s streak from 2003-04 of 829 minutes without surrendering a goal in the NCAA Tournament.

“The better team won today," said A&M coach G Guerrieri. "[Florida State] went about their business in a professional manner and had a bit too much for us to handle on this day. They’re one of the more patient and tactically gifted teams that we’ve come across in many years of NCAA Tournament play, so today I simply tip my hat to and say that we wish them all the best as they go forward try to repeat as national champions.

More from College Soccer Reporter
This is your last free article! Special Offer: Unlimited access for 50¢!