Christian Pulisic 'on a really good path' at Borussia Dortmund

Pulisic spent much of 2015 with the U.S. U-17 national team, for which he played in 24 games, including three at the U-17 World Cup in Chile. Still, Pulisic managed to play eight games for Dortmund’s U-17 team -- scoring six goals as it won the 2014-15 German U-17 national championship – and six games for the U-19s, who are undefeated with nine wins and one tie in the U-19 Bundesliga West.

“Christian normally plays in the No. 10 position or on the wing,” says Dortmund’s U-19 head coach Hannes Wolf. “His strengths are his mentality, his speed, and his skills. He is a team player and strong in every part of the game.”

Pulisic is one of a few youth players who practices with the first team when Borussia Dortmund’s stars are on national team duty. Eight Dortmund players have been capped by Germany, including 2014 World Cup winners Mats Hummels and Kevin Grosskreutz, and Marco Reus. Other national team players include Serbia’s Neven Subotic, who represented the USA at the U-17 level, Japan’s Shinji Kagawa, Turkey’s Nuri Sahin and Colombia’s Adrian Ramos.

“It was, and still is, a big adventure for him to live in Dortmund,” Wolf says. “Christian learned German very fast and is deeply respected by his teammates, because of his personality and quality. We hope for Dortmund to be a second home for him. ...

“He works hard every day. If Christian goes on like this, he is on a really good path.”

Borussia Dortmund's U-19 team. Christian Pulisic is in the front row, second from the right.

Two years ago, at the Nike International Friendlies, Pulisic got foreign scouts’ attention when he was named MVP as the USA beat Brazil, 4-1, and England, 5-1.

This year’s Nike Friendlies, a year-end event for more than a decade, was contested by players born in 2000 (currently U-15s), whose ultimate aim is the 2017 U-17 World Cup.

The Americans were coached by U-15 national team coach John Hackworth, an indication that Richie Williams, the U-17 coach for the last two cycles, is being replaced. Williams had failed to qualify the USA for the 2013 U-17 World Cup and it exited this year’s U-17 World Cup with a tie and two losses.

The USA opened this year’s Nike Friendlies with a 3-2 loss on a stoppage-time goal to England before beating the Netherlands, 2-1, on a last-gasp goal by Josh Sargent of Scott Gallagher Missouri. The Portland Timbers’ Adrian Villegas opened the scoring when his shot deflected into the net off the legs of Dutch keeper Terence Meuwese.

Against England, the USA came back from a 1-0 halftime deficit to take 2-1 lead, on goals by the Georgia United duo of Chris Goslin and Andrew Carleton early in the second half. But England’s Jadon Sancho equalized on a penalty kick and scored the winner in stoppage time.

According to the Daily Mirror, Manchester City paid Watford a $100,000 transfer fee for Sancho last March that could rise $750,000 based on appearances. Sancho also scored in a 2-2 tie with the Netherlands that clinched the Nike Friendlies' title for England, which had beaten Brazil, 2-0.

With the loss to Brazil, the USA finished tied on points with Brazil but with an minus-3 goal difference to Brazil’s minus-2, while the Dutch finished runner-up. 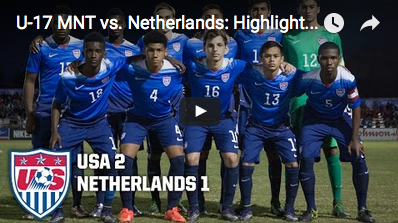