Reffing Futsal (Part 3): How and why the two-referee system works for futsal

My last articles were an introduction to refereeing futsal and the taking of kicks from the second penalty mark plus all other restarts. Today, let’s move on to the positioning of referees in futsal.

The two refs are on different touchlines. The positioning of futsal refs is similar to that of assistant refs in outdoor soccer as they are parallel to the second-to-last defender. ARs are exactly parallel to properly judge offside but since there is no offside rule in futsal, each ref need not be exactly parallel to the second-to-last defender and this is simply a rough guide to follow. Should there be a play in the penalty area, the lead ref is on or by the goal line, in part to properly judge if the ball crossed the goal line.

The only restarts that require the referees to switch positions (from lead to trail ref and vice versa) are kick-ins and corner kicks. This is very important as the majority of referee sprints in futsal are caused by these restarts. 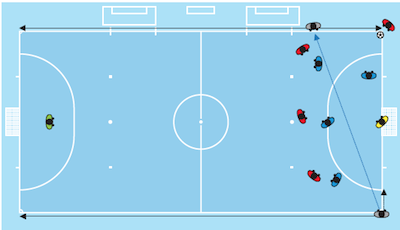 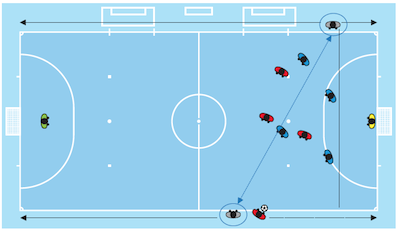 On kick-ins, the ref on the same touchline as the kick-in is the trail ref and moves behind the ball. The other ref is the lead ref. So depending on their positioning when the ball went over the touchline, both refs could sprint to entirely different positions before the kick-in is taken.

With all this sprinting, refs need to be aware of their responsibilities outside positioning. The ref on the same touchline as the corner kick or kick-in makes sure that it’s taken properly and defenders are at least five meters from the restart. The ref on the other side watches for off-the-ball fouls, particularly those involving the goalkeeper in front of the goal. 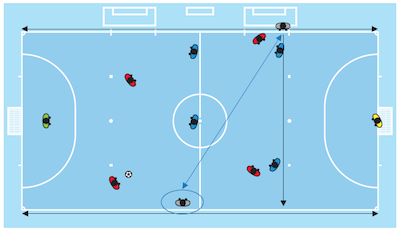 I was refereeing a boys U-13 championship game and had learned in a previous game that No. 13 white often fouled players as restarts were taken and before the ball came to him as he did not expect to get caught. The white team had five fouls in a close game at the end of the second half. In a kick-in by the opposing team’s goal, No. 13 white pushed a defender as the ball approached so I blew the whistle for white’s sixth foul of the half. The opposing team’s goal off a direct kick from the second penalty mark wound up being the winning goal. The white team might not have been too happy but it was the correct call.

In my final article on refereeing futsal, I’ll write about the challenges facing refs and which futsal rules youth soccer should modify for player development and keeping games on schedule.

(Randy Vogt has officiated over 9,000 games during the past three decades, from professional matches in front of thousands to 6-year-olds being cheered on by very enthusiastic parents. In Preventive Officiating, he shares his wisdom gleaned from thousands of games and hundreds of clinics to help referees not only survive but thrive on the soccer field. You can visit the book’s website at http://www.preventiveofficiating.com/)