USA and Mexico (with plenty of U.S. players) poised to qualify for U-20 Women's World Cup

The USA's streak of 15 straight wins in U-20 Women’s World Cup qualifying ended when it tied Mexico, 2-2, in its opening game of the Concacaf U-20 Championship, but wins over Panama (6-1) and Haiti (6-0) have Michelle French's team poised to clinch qualification on Friday.

The rout of Haiti on Wednesday earned the USA first place in Group B on goal difference over Mexico, setting up the USA for a semifinal with host Honduras, which has never qualified for the U-20 Women's World Cup, on Friday. Mexico must play Canada, the only perfect team at the tournament. The semifinal winners and the third-place game winner qualify for the 2016 U-20 Women’s World Cup in Papua New Guinea.

French brought a young squad -- 12 high-schoolers and eight collegians -- to the qualifiers in Honduras. Its captain, 17-year-old Mallory Pugh, who played at the 2014 U-20 Women’s World Cup and is also eligible for the 2018 edition, leads the qualifying tournament with five goals. The Real Colorado forward has also assisted on three goals.

University of North Carolina sophomore Jessie Scarpa scored a hat trick against Panama and has four goals and three assists. Scarpa, who played youth ball with the VSI West Florida Flames, had eight goals and eight assists for the Tar Heels during the 2015 season. SoCal Blues’ Ashley Sanchez, a high school junior like Pugh, has four assists. 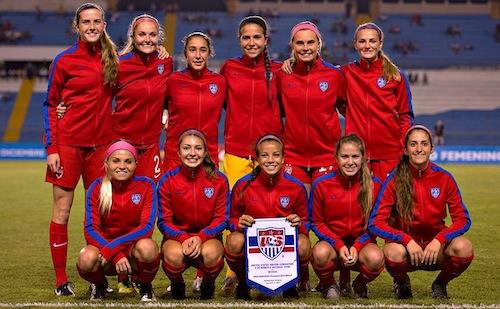 MEXICO’s U.S. CONNECTION. Half the players on Mexico’s squad are Mexican-Americans, including starting goalkeeper Emily Alvarado of Texas Rush.

Two years ago, Alvarado saved two penalty kicks in the shootout tiebreaker that knocked the USA out of qualifying for the 2014 U-17 Women’s World Cup.

Southern Californian Kiana Palacios, who played youth ball with Slammers FC and is a sophomore at UC Irvine, scored the equalizer in Mexico’s comeback against the USA.

Maria Sanchez, who hails from American Falls, Idaho, and is a sophomore at Idaho State, scored two goals in Mexico’s 5-0 win over Haiti. She was on Mexico's roster for the 2015 Women's World Cup.

Mexico, which has qualified for all but one U-20 Women’s World Cup, will face a tough test in its semifinal against Canada, a two-time U-20 Concacaf champion. But should it lose Friday, it will have another chance to qualify by winning the third-place game.

U.S. U-15 boys national team coach John Hackworth has called in 36 players for the final 2015 camp, Dec. 13-20 in Sunrise, Fla., for players in the 2002 birth cycle. The camp will include an intra-squad match game Dec. 16 and games against Florida Development Academy clubs Kendall FC and Weston FC Dec. 19.