The USA started slowly at the Concacaf U-20 Women's Championship, tying Mexico, 2-2, in their opener. But Coach Michelle French's team followed up by outscoring its next four opponents 20-1 to win the regional title and qualify for the 2016 U-20 Women’s World Cup.

A 7-0 semifinal win over host Honduras clinched qualification, and the icing came with a 1-0 final win on Sunday over Canada that gave the USA its fourth straight Concacaf U-20 crown.

The U.S. U-20 women have now qualified for all eight World Cups since the biennial tournament’s launch in 2002. No other U.S. youth national team has a perfect record in world championship qualifying.

The U.S. U-17 boys once had the most impressive streak as the only nation to have qualified for the first 14 boys U-17 World Cups -- until they failed in 2013.

The men’s U-20 World Cup, launched in 1977, is FIFA’s oldest youth world championship and the USA has qualified for 14 of the 20, most recently failing to qualify in 2011.

The girls U-17 World Cup didn’t launch until 2008, when the USA finished runner-up. But the USA didn’t qualify in 2010 and also missed the last one, in 2014. In both instances, they fell in the semifinals in shootouts. Qualifying for the 2016 girls U-17 World Cup takes place March 3-13 in Grenada.

The last U.S. performance at the U-20 Women’s World Cup ended in a disappointing quarterfinal exit to North Korea in a penalty kick shootout. The silver lining came with the performance of Mallory Pugh, who started all four U.S. games three months after her 16th birthday. The Colorado product, who is now 17 and also eligible for the 2018 U-20 World Cup, captained the USA and won the Golden Boot (with seven goals) and the Golden Ball (MVP) at this year’s Concacaf U-20 Championship. Rose Chandler, a backup keeper in 2014, won the Golden Glove.

• Ashley Sanchez, a Southern California high school junior, scored the winning goal against Canada and had four assists in the tournament.

• Pugh had four assists to go with her seven goals.

• The USA’s 20-player roster comprised of 12 high-schoolers and eight collegians.

• Mexico qualified for the U-20 World Cup, along with the USA and Canada, thanks to a 2-0 win in the third-place game over host Honduras. Both Mexico goals were scored by Southern Californians -- Kiana Palacios and Jacqueline Crowther.

Highlights of USA's 7-0 win over Honduras that clinched a U-20 World Cup spot: 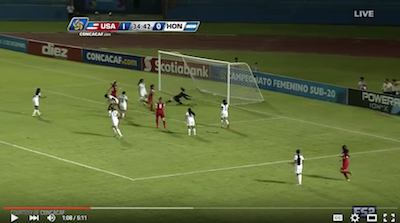 The first three goals in the second leg of the Mexican U-20 national championship final between Santos and Tijuana were scored by U.S. products.

Tijuana started five Americans -- Adrian Zendejas, Fernando Arce, John Requejo, Paul Arriola and Amando Moreno – and got goals from Moreno and Arriola in a 3-2 win that tied the series, 3-3, on aggregate and forced a penalty kick tiebreaker that Santos won to take the crown.

Santos’ first goal was scored by Herbert Robinson, who was born and raised in Mexico but was called into a U.S. U-20 camp in 2014. His grandfather was born in Texas and his father has dual citizenship.

Santos also won the Mexican U-17 national team title with a 4-1 win in the second leg of the final against Pachuca after tying the first leg, 2-2. The Santos’ starting lineup included Northern Californian Carlos Flores. Another Northern Californian, Edwin Lara, who played for Mexico at the 2015 U-17 World Cup after leaving the U.S. program, started for Pachuca.

The National Soccer Coaches Association of America has announced its year-end awards for youth and high school coaches and player: