Reffing Futsal (Part 4): How to handle the tricky situations and modifications for youth games

My last articles were an introduction to refereeing futsal and the taking of kicks from the second penalty mark, all other restarts and referee positioning. Today, let’s conclude with challenges facing refs and which futsal rules youth soccer should modify for player development and keeping games on schedule.

Futsal does not have an offside rule, so attackers can be anywhere on the field, including on restarts. Unfortunately, some coaches put an attacker by the keeper to screen him. Invariably, then a defender gets involved to try and push the attacker from the keeper and the ref needs to see this and sort it out quickly before it becomes an issue.

Because a futsal goal is small, three meters by two meters, this tactic of trying to bother the keeper generally does not work as the extra players tend to clog up the area in front of the goal and shots are blocked by those players, whether intentionally or not. It’s much better for coaches to design plays with quick one-twos and square passes on restarts as that’s the way to score in futsal.

The ref cannot allow the pushing and shoving by the goal that is often incorrectly allowed in outdoor soccer. Maybe those reffing futsal will become more courageous by being aware that whistling a penalty kick or disallowing a goal is not as critical a decision in futsal as in outdoor soccer because of many more goals scored in a futsal game.

Substitution can be an issue in futsal as it’s done on the fly. If a player enters the field before the player being replaced has left, futsal’s rules call for an indirect kick where the ball was (when play was stopped) to the opposing team plus the sub to be cautioned. With kids, I would refrain from cautioning -- unless the team is truly a repeat offender -- because in this regard the indirect kick should be punishment enough. 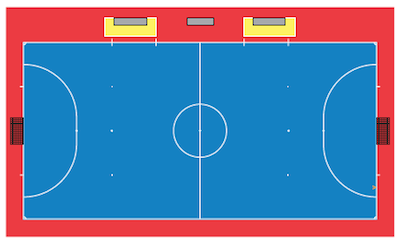 The team benches are on the side of their defensive half as it’s easier to substitute this way. Futsal rules allow teams to switch the side of the field and their benches at halftime. For youth and amateur games, this is unnecessary as it takes up valuable time and the players should stay on the same bench and side of field the entire game.

Sent-off players cannot return to the game, obviously, and their team plays down a player for two minutes. The penalty is similar to hockey so if a goal is scored in what essentially is a power play, the shorthanded (really “short-footed” team) is back to even strength.

Teams are allowed one timeout per half in futsal for the coach to strategize. Many futsal leagues, to keep the games on time, do not allow timeouts. To prevent overcoaching as well, this is a good move. 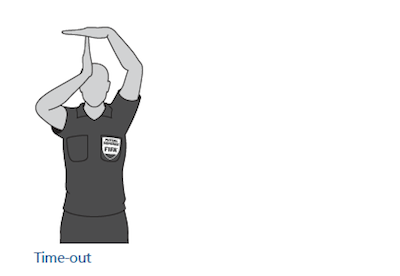 I prefer preventing keepers from throwing the ball over the halfway line. When you allow it, keepers throw the ball the length of the field. This defeats the purpose of playing futsal as the teams do not take the time to move the ball upfield through passing and dribbling.

Finally, futsal now allows slide tackles, which is a huge mistake for leagues played on hard surfaces for the obvious reason. Make slide tackles as well as keepers coming out to attackers feet first a foul punishable by a direct kick or penalty kick as it’s very dangerous.

I hope my ideas in these past four articles will be helpful both to referees and to futsal leagues.

Reffing Futsal (Part 3): How and why the two-referee system works for futsal

(Randy Vogt has officiated over 9,000 games during the past three decades, from professional matches in front of thousands to 6-year-olds being cheered on by very enthusiastic parents. In Preventive Officiating, he shares his wisdom gleaned from thousands of games and hundreds of clinics to help referees not only survive but thrive on the soccer field. You can visit the book’s website at http://www.preventiveofficiating.com/)