Reggae Girlz get boost from U.S. coaches and players, and Cedella Marley

In his day job, Lorne Donaldson is the director of Real Colorado, the club in the news most recently for spawning teen star Mallory Pugh, several other girls in the U.S. youth national team program, and goalkeeper Ethan Horvath, the 20-year-old whose Europa League play with Norwegian club Molde earned him the starting job with the U.S. men’s U-23 team that’s aiming to qualify for the 2016 Olympics.

In his spare time, Donaldson has been helping out another nation -- his native Jamaica, which he left in 1979 for the USA to play college ball at Denver’s Metropolitan State. Girls did not play competitive soccer when he was growing up on the island.

“Oh no, girls just started playing soccer competitively about a decade ago,” said Donaldson, who is head coach of Jamaica’s U-17 girls national team and assistant of its women’s U-20s and full national team. 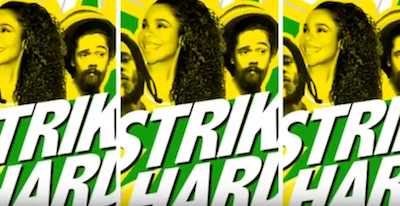 In 2008, the Jamaican federation cited a lack of funds for scrapping its women’s national team program. The recent revival, which led to the recruitment of Donaldson, came thanks to Cedella Marley, the daughter of reggae star Bob Marley.

Bob Marley, when he toured with his band the Wailers, required access to a nearby soccer field for them to play and explained his enchantment with the sport like this: “Football is a whole skill to itself. A whole world. A whole universe to itself. Me love it because you have to be skillful to play it! Freedom! Football is freedom.”

Marley died in 1981, 17 years before the Jamaican men qualified for their first World Cup. His love for the sport had an effect on Cedella: “I grew up watching my father and brothers play soccer.”

Cedella’s efforts to make soccer a game for girls to play, and not just watch, include a fund-raising campaign for which she and her brothers, Damian and Stephen Marley, recorded the song, “Strike Hard.”

In the quest for a Jamaican women's team to qualify for a World Cup, the Jamaican federation (JFA) has looked for guidance from Jamaicans in the USA. The JFA hired Hue Menzies, director of the Central Florida Kraze Krush, as technical director and enlisted Donaldson, who before his two decades in the youth game coached the Colorado Foxes in the APSL, the top tier of U.S. men's soccer before MLS’s launch in 1996. 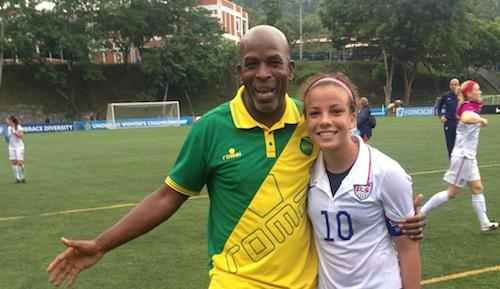 “For girls, soccer is at the bottom of the sports list in Jamaica,” says Donaldson. “If it was track & field, everything would be good. Girls soccer is kind of taboo in Jamaica a little bit. We’re trying to change that culture.”

Donaldson cites Jody Brown, a 14-year-old who plays on the Jamaica U-17s.

“If we can get her a good situation to play, I think she’d be top 5 in the world in her age group,” he says. “She’s an unbelievable player who plays with boys right now. But there’s a rule in Jamaica when you get to a certain age, they can no longer play with boys. She has no place to play. There’s no girls team in her town.”

The hope is that if a Jamaica girls or women’s team qualifies for a world championship, it will popularize women’s soccer on the island. To that end, Menzies and Donaldson have recruited girls from the USA with Jamaican descent to complement island talent.

Donaldson’s U-17 Jamaica team that he took to the Caribbean championship included seven U.S. products. He didn’t have a chance to train the team before they showed up for the Puerto Rico-hosted tourney, but says they had no problem meshing.

“I didn’t know some of the girls and the girls didn’t know each other,” Donaldson said. “By the second and third day, they started coming along as a group. They get along very fine.

“Most of the U.S. girls have been to Jamaica with their family and most of them really do like the culture. So it’s not like a hard adjustment to be a part of it. Their families still cook Jamaican food. They still talk Jamaican. Some of them, especially ones from Florida, grew up in a Jamaican environment.”

The bigger challenge was for the Jamaica-raised girls who had no experience with travel soccer.

“It’s more difficult for the Jamaican kids when they travel trying to eat different food,” Donaldson said. “They don’t like pasta. They want jerk chicken and curry chicken and whatever. We have to change their mentality on food.”

Jamaica came up short in qualifiers for the 2015 Women’s World Cup. At the U-20 World Cup qualifying tournament in December in Honduras, Jamaica beat Trinidad & Tobago (6-1) and tied host Honduras (2-2), but a 7-0 loss to Canada ruined the goal difference it needed to reach the semifinals. Several Jamaica starters, U.S. collegians, were unavailable because the tournament fell during finals time. The USA, captained by 17-year-old Pugh, who scored a Golden Boot-winning seven goals, finished first.

In November, the U-17 Jamaica team coached by Donaldson beat Trinidad & Tobago in the semifinals and Haiti in the final to win the U-17 Carribbean championship. That takes the Reggae Girlz to the next step, the Concacaf qualifying tournament for the 2016 U-17 World Cup March 3-13 in Grenada.

The Reggae Girlz will be competing for one of the region’s three spots at the World Cup against seven other teams, including favorites USA, Canada, Mexico and Costa Rica -- the four countries from Concacaf that have qualified for the U-17 Women’s World Cup.