The firing of head coach Peter Nowak by the Philadelphia Union is perhaps the most litigated personnel issue in MLS history with three different suits that have bounced around the courts. 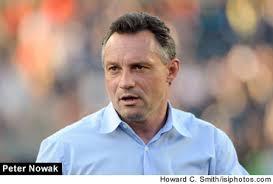 A wrongful dismissal suit against Union was initially filed in the Federal court but later moved to arbitration as per the employment agreement Nowak had with the Union. Arbitrator Margaret Brogan ruled against Nowak and ordered him to pay the Union $454,258.89 in legal fees.

A suit against Major League Soccer for tortious interference with Nowak's employment was also filed in Federal court, where it was dismissed for lack of subject matter jurisdiction, and then re-filed in state court. Nowak also sued the MLS Players' Union on the same grounds in Federal court, but that case was tossed on the grounds that the actions of the MLSPU -- advocating on behalf of the aggrieved Philadelphia players -- was just what it was supposed to do under the National Labor Relations Act.

The release by Jonathan Tannenwald of Philly.com via Twitter (@TheGoalkeeper) of the evidence in the case included assertions that:

-- Nowak spanked rookies in a hazing routine he had used at D.C. United, going so far as to dipping his hand in ice water before spanking them and hitting players with a sandal.

Here is a section on Nowak hazing rookie players. It is a bit graphic. pic.twitter.com/t3Y21kXTPv

-- He had players run 8-10 miles without access to water;

We return to that run in which players were denied water. Nowak had this chat with head trainer Paul Rushing: pic.twitter.com/WnYElEiqoe

-- He mocked players for complaining about concussions and accused them of faking concussions;

An excerpt from the filings: Peter Nowak's opinion of concussions, and the MLS Players Union's view of him. pic.twitter.com/yqQ8NLSfsj

-- He traded an unnamed player two weeks after the player brought Nowak's treatment of players to the attention of the MLS Players' Union.

Nowak's side asserts this about the player who was supposedly traded because he complained to the players' union: pic.twitter.com/MeJySqHdyF

The situation was so bad the MLS Players' Union threatened to strike if Nowak wasn't fired.