MLS will return to network TV, break in June

New in 2016 will be four games on Fox. Highlights of Fox’s broadcast coverage include a NYCFC-Red Bulls derby on May 21 at Yankee Stadium, part of MLS Heineken Rivalry Week and a Fox network soccer doubleheader that includes live coverage of the FA Cup final from England.

The Fox broadcast schedule also features three Sunday afternoon games: Seattle-Portland in the Cascadia Cup on July 17, a second NYCFC-Red Bulls match at Yankee Stadium on July 24 and Portland-Sporting Kansas City on July 31. All matches on Fox are preceded by a special 30-minute pregame show. 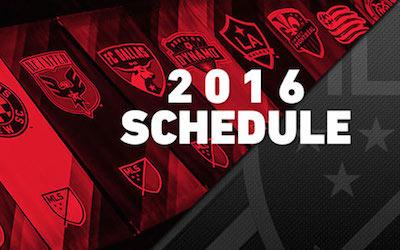 Fox Sports' other 30 MLS regular-season games will air on Fox Sports 1. ESPN, an MLS broadcast partner since the league's launch 20 years ago, will also air 34 games during the regular season: 29 games on ESPN and five on ESPN2.

JUNE BREAK. MLS kicks off its 21st season on March 6 with 10 games. The 33-week regular season ends on Oct. 12-14, 2012. The league will take off for the first two weekends of the Copa Centenario in June and is scheduled to play only 10 games over the weekends during the FIFA fixture windows in March, September and October, down from 18 games in the same windows played in 2015.

If the June break holds, it will mark the first time MLS has not played at least one game on every weekend of the regular during a non-World Cup year since the weekend of June. Before breaking for the first weekend of the Copa Centenario on June 3-4, teams will play six mid-week games.

The MLS schedule calls for 46 games on Wednesdays or Thursdays and three games on Monday, July 4. MLS often adjusts the schedule after its unveiling, increasing the number of midway games as conflicts arise.

In 2015, the Montreal Impact played just five games during the first 10 weeks of the season. Three games were rescheduled to allow a break for the Impact ahead of Concacaf Champions League matches.

In 2016, both legs of the CCL quarterfinals are scheduled to be played before the start of the MLS season. If any of the four MLS teams survive their series against Mexican opponents, adjustments could be made for the quarterfinals on March 15-17 and April 5-7 and final on April 20 and April 27.