In 1977, Lynn Berling-Manuel, as a young editor with Soccer America Magazine, went to cover the annual NSCAA Coaches Convention held that January in San Francisco. She went not knowing what to expect, but came out changed.

“It was transformative,” she said. “The passion of the coaches really touched me and was something that I took back with me. They were warm and welcoming. They made me feel that working in soccer was truly important. It helped set the path of my own career in soccer. ”

This year’s NSCAA Convention in Baltimore will mark Berling-Manuel’s 40th January trip to what is now the world’s largest gathering of coaches. But this is her first as the CEO of the NSCAA, the position she took last May after more than two decades at Soccer America and an 8-year stint as Chief Marketing Officer of AYSO.

The National Soccer Coaches Association of America celebrates its 75th anniversary in 2016. Founded in 1941 by a group of college coaches to support soccer coaches and promote soccer, today it is the largest soccer coaches’ membership association in the world. Its members are coaches from professional, college, high school and club to grassroots soccer. The NSCAA awards coach of the year honors at all levels, delivers hundreds of coaching courses each year, provides resources for professional development, selects the college, high school and youth all-Americans, produces weekly college rankings, creates wide-ranging networking opportunities and hosts the annual convention. 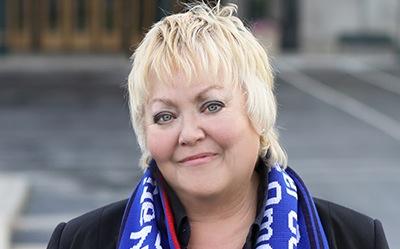 “Her experiences in the industry as an executive with Soccer America and AYSO, coupled with her long-standing leadership role within the NSCAA, make her a natural fit as our CEO," said NSCAA President Mike Jacobs upon her hiring.

Her introduction to the soccer industry came through journalism. She was working as a political journalist in the San Francisco Bay Area and offered to help out her father, Clay Berling, who had founded Soccer America in 1971 in Berkeley, California.

“I never played and I never coached, I just like to get that out of the way,” she said. “I was working as a journalist and started working with Soccer America to help my dad. I thought it would be six months. Going to my first NSCAA convention helped change that trajectory.”

By the time she left Soccer America in 2007, Berling-Manuel had been its editor-in-chief, publisher and then CEO, and transitioned it into a multi-platform soccer media company.

Berling-Manuel served on the NSCAA Board of Directors as an at-large member appointed by the NSCAA president for nearly a decade before becoming the 30,000-member organization's first woman CEO, a milestone we asked her to address.

“I am extremely honored to be the first woman in this job,” said Berling-Manuel, who had been originally invited onto the NSCAA Board to bring business and marketing experience. “I was chosen for this CEO position because of my business experience, but I value the long history of the NSCAA’s commitment to diversity and inclusion.”

As far as her first six months on the job …

“It’s been eye-opening,” she said. “I’ve been involved with the NSCAA for a long time and I’ve been on the board for nearly 10 years, but as a member, a convention attendee, even as a board member – you don’t see all the process that goes on behind the scenes. We provide tremendous services to NSCAA members. We conduct hundreds of coaching courses. We create this gigantic convention. We do almost 10,000 awards.

“I knew a lot coming in, but I’ve done a lot of learning in the first six months. I also spent a lot of time meeting with people. I spent time traveling and meeting with our national soccer organizations and state associations. Learning about what people are seeking for their coaches and how we can add value. What we do well. What we need to improve.

“For me to accomplish that I really needed to get out to the wider soccer community. A lot of these folks I’ve known for years. But lots of people I’m meeting for the first time, especially at the youth level.”

In a country where soccer has an array of youth organizations and governing bodies, high school and college ball, and various levels of pro soccer, the NSCAA is unique, says Berling-Manuel, because “we work with all organizations and represent all coaches.”

“I believe the focus on coaches is a very powerful common denominator to all organizations in soccer," she said. "Many other groups can take advantage of what we do and we want them to. We want them to feel included.”

By providing coaching education at all levels and creating opportunities for coaches to network, the NSCAA aims to improve the soccer experience for all those involved -- the coaches, their players, parents, referees, administrators and fans.

“I believe coaches really are transformational in the game, almost more than anybody, in many ways,” she said. “And that can be for good and bad. They’re the individuals who will make players’ and families’ soccer experiences fantastic or terrible. Our aim is to help make it a fantastic experience.”

That first NSCAA Coaches Convention Berling-Manuel attended drew barely 200 coaches. More than 5,000 coaches are expected in Baltimore, joined by thousands of others, including representatives of over 400 exhibiting companies. The NSCAA Convention hosts U.S. Youth Soccer’s annual Workshop and Major League Soccer has held its SuperDraft there since 2003. The National Women’s Soccer League draft now takes place there as well. Nearly 1,000 youth, high school and college players will be honored at the All-American luncheon where U.S. national team coach Jill Ellis will be honored as the 2016 Honorary All-American. Last year, Alex Ferguson accepted the honor. In all, some 10,000 attendees are expected.

“That first convention I went to, it seemed all the coaches could fit in one room,” Berling-Manuel said. “One thing we’re working hard to maintain is that sense of collegiality and intimacy so that it remains a wonderful networking event. That’s what has always been so powerful about the convention. I know it’s where I met many of the soccer friends I’ve had for years.