The journeys of our projected top 15 picks in Thursday's MLS SuperDraft have some commonalities. Many are excellent students. No. 1 Joshua Yaro, the son of Ghanaian school teachers, has a photographic memory. North Carolina has three players on our list, and Georgetown and Stanford have two apiece as their strong academics attract players not easily sidetracked by a risky career in pro career.

Germans Julian Buescher and Fabian Herbers turned to the U.S. college ranks after their careers stalled at home. Brandon Vincent, Jack Harrison and Keegan Rosenberry have entered the SuperDraft after Homegrown claims expired or were rejected.

The longest journey to the draft was taken by Ben Polk, who as an infant survived a terrorist attack in Saudi Arabia, where his father was stationed, then had a promising career in England derailed because of trouble at home. It took a move to the upstate New York -- and three schools in three years -- for him to reach the pinnacle of the college game.

1. *Joshua Yaro (Georgetown/Ghana). Yaro has been considered the top pro prospect in college soccer for two years before coming out after his junior season. Just where he ends up -- team and position -- remains to be seen. The Chicago Fire has the top pick but could trade it away. He played center back for the Hoyas, but he could end up at right back because of his size (5-foot-11). There is no doubt about his athleticism -- he was the second fastest player at the Combine and had the third highest vertical leap -- and his smarts.

2. Brandon Vincent (Stanford). Jurgen Klinsmann thought enough of the two-time first-team NSCAA All-American that he called Vincent (pictured) on Friday after the first day of the Combine and told him he wanted him to join the national team at the January camp that began Sunday in California. Vincent is eligible for the U.S. U-23s who could use a left back with his skill set. He's also probably the readiest player in the draft and could fit right away in the starting lineup at left back on several teams. 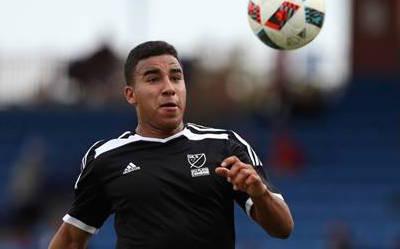 3. *Jack Harrison (Wake Forest/England). Like Yaro, who first came to the United States to attend boarding school at Cate School in California, Harrison went to boarding school at Berkshire School in Massachusetts before enrolling at Wake Forest, where he was the first player to win the ACC Offensive Player of the Year and Freshman of the Year awards in the same season. New York City FC had a Homegrown claim on Harrison rejected and will need to trade up from its No. 4 pick in the draft to be sure to get the 19-year-old midfielder who can play in the middle or out wide.

4. *Julian Buescher (Syracuse/Germany). Buescher debuted at the age of 18 in the German third division but never got anywhere, so he made the move to the United States on the recommendation of Mark Taylor, an American he played with at Preussen Muenster, and despite very limited knowledge of English. He's one of the top midfielders in the SuperDraft but like fellow German GA player Fabian Herbers has his age -- he will turn 23 in April -- working against him. Buescher starred with Syracuse teammate Ben Polk, another import who should go high in the SuperDraft, for the PDL's Kitchener-Waterloo United last summer and then contributed eight goals and 11 assists in helping the Orangemen advance to the Men's College Cup for the first time.

5. *Richie Laryea (Akron/Canada). Laryea came out of the same Sigma FC academy program in Toronto that produced Cyle Larin, last year's No. 1 pick in the SuperDraft and the MLS Rookie of the Year with Orlando City. Larin had pro material written all over him when he enrolled at UConn. Laryea's development in the Akron midfield was more of a surprise. As a sophomore, he led the Zips with 11 goals and added seven assists as they had their best season since Caleb Porter left to take the Portland Timbers head coaching job. An MLS team looking for a young midfielder with quickness and some skill to provide minutes off the bench could snap him up quickly.

6. *Omar Holness (North Carolina/Jamaica). Not many college players can say they spent last summer at the Gold Cup -- and on the Concacaf runner-up no less. Holness, an excellent student, didn't get any playing time for Jamaica's Reggae Boyz but just bringing him in shows how much his talents are valued. Holness isn't much of a scorer -- five goals in three seasons with the Tar Heels -- but he should go high in the SuperDraft for his two-way ability to cover a lot of ground.

7. *Fabian Herbers (Creighton/Germany). Only Stanford's Jordan Morris beat out Herbers for the Hermann Trophy, but the German had better numbers: 15 goals and 17 assists for 47 points, the most of any player in the country. That makes him the top forward in the draft, though a couple of factors work against him. He isn't a true center forward, so with most MLS teams only going with one forward, he'll have to find a position. Like most of the Germans who have moved into the college ranks, he is on the older side. He's already 22 after only three years of college ball.

8. Keegan Rosenberry (Georgetown). Rosenberry played with Yaro and Brandon Allen and Alex Muyl, who signed Homegrown contracts with the New York Red Bulls, on the Hoyas, who had a 17-game unbeaten streak before falling to Boston College in a shootout in the third round of the NCAA Tournament. The Philadelphia Union's claim to Rosenberry was declined by MLS -- he spent the summer studying at Georgetown -- but the Union will get two shots at drafting him as it holds the No. 3 and No. 6 picks in the SuperDraft.

9. Jordan McCrary (North Carolina). McCrary started on the backline on Carolina's 2011 national championship team alongside current MLS players Matt Hedges and Boyd Okwuonu. A knee injury forced him to redshirt in 2014 and return for a fifth season, but he should go high as he is capable of playing at both outside back positions.

10. Ben Polk (Syracuse). Comparisons to Sporting KC star Dom Dwyer come easily, given his soccer skills (5-foot-9 forward with a nose for the goal) and soccer background (English product whose U.S. travels began with JC ball). But to say Polk has seen a lot is an understatement. He was born in Arizona to an American father and Scottish mother, spent his early years in Saudi Arabia, where he survived a terrorist attack on the compound where his father worked for the U.S Air Force, then moved to Oxford, England, where a promising soccer was sidetracked because of his mother's alcoholism -- he had no one to get him to practice and games after she lost her driving license. Moving to the United States came out of the blue and allowed him to get a free education, but he played at three upstate New York schools -- Genesee CC, Herkimer County CC and Syracuse -- before exhausting his college eligibility after three years last fall.

11. Eric Verso (Stanford). He probably helped himself more than any other player during the first two days of the MLS Combine with one goal and two assists. He's the kind of player that rarely comes out of the college game and has an even harder time making it in MLS: an American playmaker. He was overshadowed at Stanford, what with teammates like Morris and Vincent and sophomore Corey Baird, but Verso had 13 assists and punctuated his final year as a redshirt senior with a goal and assist in the Men's College Cup final. He grew up in the LA Galaxy academy program but didn't qualify for HG status.

12. Tyler David (Saint Louis). In the late 1960s, Trinidadians Warren Archibald, Leroy DeLeon and Everald Cummings were pioneering stars in the NASL. Another Trinidadian, Steve David, came along later but was one of the enduring stars of the league with 100 goals for six clubs over eight seasons. Tyler, Steve's son, is, by contrast, a defender. Steve was known for his blazing speed. Speed isn't 6-foot-2 Tyler's strong suit, but his ability to read the game and leadership qualities make him stand out in a senior class heavy on center backs.

13. Elias Gomez (Rosario Central/Argentina). The SuperDraft isn't just about college players. MLS invites in select foreign players -- youth internationals, it calls them. In 2011, Toronto FC took young Ecuadoran Joao Plata with the 49th selection. TFC wasted Plata's talents, but he blossomed after a move to Real Salt Lake two years later and now holds Designated Player status. Is Gomez of Plata's caliber? Perhaps not, but he put in a great showing on Day 2 of the Combine and showed he can contribute as a left-sided player.

14. *Andrew Tarbell (Clemson). Goalkeepers rarely go high in the SuperDraft. In the last five drafts, just three keepers went in the first round: Zac MacMath and Andre Blake to Philadelphia in 2011 and 2014 and Alex Bono to Toronto FC in 2015. MLS clubs think highly of Tarbell, though, endorsing his for a GA contract. He was a big reason Clemson made it to the NCAA Division I final.

15. Jonathan Campbell (North Carolina). Campbell, a tall center back in the mold of former Tar Heel Hedges, has been projected to go as high as No. 3 in the SuperDraft but after a so-so first two days at the Combine, he'll probably go lower. That would suit Seattle with the No. 15 pick just fine. Campbell, an excellent student like his Carolina teammate Holness, starred for the Sounders' U-23 team in the PDL over the summer.