Sebastian Dremmler on Bayern Munich's formula for success, its U.S. venture and breaking into the first team

SOCCER AMERICA: Is Bayern Munich’s success at graduating players from its youth program to its first team thanks to great coaching or the fact that the club attracts players with the greatest potential to succeed?

SEBASTIAN DREMMLER: There are two big points. The key point is that our scouting system starts with U-8, U-9, U-10s. We have about 15 scouts in the Munich area. We want to make sure we know every good player in our area as soon as possible.

For example, Thomas Mueller lived [25 miles] south of Munich. He was scouted when was 9 or 10 years old. We decided to bring him to Bayern Munich when he was 12.

The second big point is we have a very good structure in Germany. We have a regional league south. We have a youth Bundesliga. When the best players play together against the best teams, they automatically get better.

Of course, I believe we have excellent coaches and offer the best development and best education. And that at Bayern the players learn from the best and train with the best. 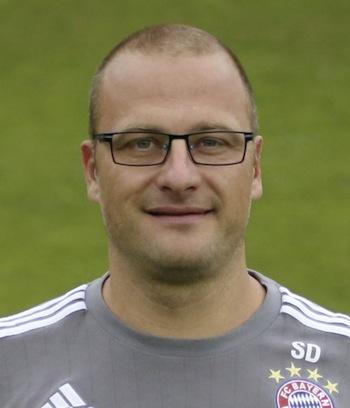 SA: So Bayern Munich’s coaches train hand-picked elite players. Your average American youth coaches, on the other hand, coach a cross section of players in their community. Is what coaches do at Bayern Munich applicable to American coaches with clubs where a roster of 15 players, for example, would include a wide range of talent?

SEBASTIAN DREMMLER: That’s a big point here in the U.S. Together with GPS, we're concentrating on the next generation, U-9s and U-12s. It’s the same challenge as with Bayern Munich. To teach them technical and tactical things, learning by doing, working with the ball. They have to do this here as well.

SA: Bayern Munich of course has been famous in recent years for its youth academy players such as 2014 World Cup winners Bastian Schweinsteiger, Philipp Lahm, Thomas Mueller and Toni Kroos. But we haven’t seen a new generation of Bayern youth players breaking into the first team. Are we seeing a gap in the success of Bayern’s youth development?

SEBASTIAN DREMMLER: It’s not a break. In this winter’s training camp in Doha, we had five youth players including, a 15-year-old goalkeeper who trained daily with Manuel Neuer. We have a lot of good young players.

But our professional team is getting better and better. The quality is unbelievably high. It’s not easy for an 18-year-old boy to say, 'Come on, Arjen Robben, now I’m playing.' When we substitute Arjen Robben, Franck Ribery is playing. Both are international stars.

Five to 10 years ago, it was easier. When Thomas Mueller and Holger Badstuber came in, it was easier for the because the quality was not so high. But the goal is of course to bring all the top players into the professional team. We also know that won’t work each year. It depends on the coach as well.

Our formula for success is to develop our own players for the pro team and to buy top players.