To say that Jack Harrison took a unique path to pro soccer may be an understatement. The England-born midfielder -- the No. 1 draft pick in the 2016 MLS SuperDraft -- played for Manchester United’s youth academy, a prep school in Massachusetts and a multi-cultural New York City youth club before spending one season with Wake Forest University.

Harrison, 19, was picked by the Chicago Fire, which traded him to New York City FC, which means he’ll be starting his pro career in the city where he spent much of his youth ball despite attending the Berkshire School in Sheffield, Mass., 120 miles north of New York City.

Manhattan SC coach Wilson Egidio heard about Harrison from the father of another player on the club who told him, “This kid is going to be the best player on the team.”

For three years, Harrison took the train or got picked up by other parents to play games and attend as many practices as possible on the East River’s Randall’s Island.

“When it was time for the knockout game, he had a bad stomach and went to rest in a van. It was parked so he could see the game. I went to the van and said, ‘We need a goal. How do you feel?’ He said, ‘Let me go out. Let me try.’

“He got the ball at midfield and went straight to goal. He made the last defender look like a cone and scored. And then went back to the van.”

“That was something very special about the team -- the diversity was amazing,” said Harrison. “It was nice to pick up different things from different players. It was something you don’t get in England.”

Harrison grew up in the Greater Manchester town of Bolton. Asked to describe how much soccer he played as a youngster, his mother, Deborah, said, “He’d sleepwalk playing soccer.” 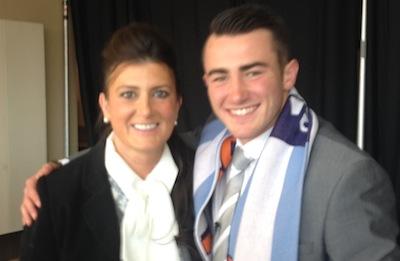 Jack Harrison and his mother, Deborah.

Harrison joined Manchester United’s youth academy at age 7 and when at age 14 team he was set to commit through age 16, Deborah had qualms about that path having a negative effect on his education.

“Of course, he wanted to be a professional player,” she said, “but as a parent he have to be careful about falling into that trap. What I said to him is if he had an option to play professionally, it’s a bonus. You have to think of it that way and concentrate on education.”

Deborah had done some research and discovered that in the USA a kid could pursue higher education and a career in soccer.

“I did a bit of googling,” she said, “and discovered the Berkshire School.”

She connected with Berkshire soccer coach Jon Moodey and since a move to the USA could lead to college, decided to have Jack leave home.

“It was very difficult,” she said at SuperDraft in Baltimore. “But Jon Moodey took good care of Jack. ... In 2014, he only came home for 12 days. He was supposed to be back for three months, but that turned into seven weeks. Then a few days before he was due to come home he called and said, ‘I’ve got another tournament, can I stay?’

“It was difficult. But shortly after he got there we talked on the phone, he said, 'I love it here.' ... It’s been worth it.”

Harrison finished his time at Berkshire with a senior-year performance of 16 goals and 27 assists, helping the Bears to a third straight New England Prep Class A championship and being named 2014-15 Gatorade National Boys Soccer Player of the Year. Harrison scored eight goals and had 11 assists during his All-America 2015 freshman season at Wake Forest and signed an MLS Generation adidas, which offers players a stipend toward the completion of their college education.

After NYCFC traded its No. 4 pick and general allocation money for Harrison, NYCFC coach Patrick Vierra said: "He's young, but I'm sure he will have a massive part to play in our squad. He's enthusiastic, he's full of energy, and this is what we want."

Egidio used Harrison mostly as an attacking midfielder but also as forward and defensive midfielder.

“He’s a complete player as far as being a great athlete, very fast, very quick,” Egidio said. “He plays both sides of the ball. Is tenacious on defense. He puts people in front of the goal all day long with his passes. He can shot from long-range with both feet.

“The thing with Jack is he doesn’t score ugly goals. Everything’s so pretty. It’s a chip. It’s a 20-yard shot, upper-90. It’s dribbling three, four, five people and scoring. If there’s a way there he’ll find it.”