The draw for the USA-hosted Copa America Centenario, the special edition of the South American championship that will also include six Concacaf teams, will take place at a gala Sunday, Feb. 21 at 7:30 p.m. ET, at the Hammerstein Ballroom in New York City.

The draw will fill out the schedule that so far includes the dates and venues for the first-round games of USA (Group A), Brazil (Group B), Mexico (Group C) and Argentina (Group D). 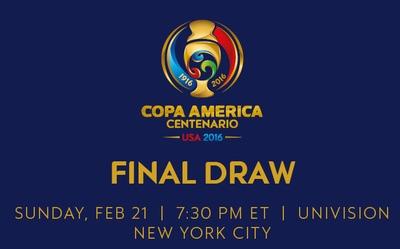 The remaining participants are South America’s Bolivia, Chile, Colombia, Ecuador, Paraguay, Peru, Uruguay and Venezuela; and Concacaf’s Costa Rica, Jamaica, Panama and Haiti. The seeding determination will be based on the December 2015 FIFA World Rankings.

The draw will be televised live in the USA by Univision.

Fans can sign up for ticket information for the tournament HERE.