So much for the Portland Thorns using the new NWSL player signing mechanism to land 17-year-old Mallory Pugh, who would have been the first player signed out of high school to join the women's league.

Horace Pugh, confirmed to The Denver Post that his daughter, a high school senior, will attend UCLA, as planned, and there were indeed no discussions with the Thorns about going pro.

"We did look at her possibly going pro," Horace Pugh told The Denver Post. "It's all over the Internet she's going to play professionally. It was very close to happening, but her gut feeling was that she wanted to go to college."

The Thorns, who have made numerous trades in the offseason, made one last move at the NWSL College Draft on Friday, acquiring the No. 1 pick in the "Unattached Subsidized Individual" process -- the women's league's version of MLS's Allocation Order -- from Boston for the No. 3 draft pick in the College Draft.

"People in the industry put two and two together," Horace Pugh told the Post, "but nothing formally was out there. We never talked to [Portland] coaches, general manger, organization or anyone." 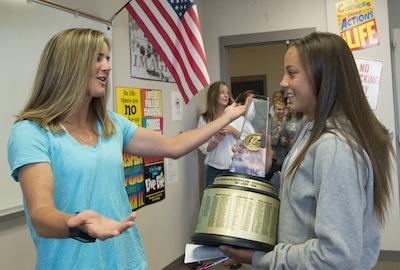 Mallory Pugh, U.S. Soccer's 2015 Young Player of the Year, is attending her first senior national team camp after leading the USA to the Concacaf U-20 women's title in December.

Her decision to enroll at UCLA after all is not without issues. The U-20 Women's World Cup in New Guinea Papua falls smack in middle of 2016 NCAA Division I Women's Tournament. The U-20 WWC final will be held on Dec. 3, a day before the Women's College Cup final.

She plays for Mountain Vista High School and Real Colorado.

The only U.S. women's player to turn pro out of high school also hails from Colorado and will play for the Thorns in 2016. Lindsey Horan returned to join Portland after four seasons at Paris St. Germain.