Less than two weeks after she was traded to two-time NWSL champion FC Kansas City, U.S. world champion Sydney Leroux announced she is expecting her first child with husband Dom Dwyer in September and will miss the 2016 season. She's the second FC Kansas City forward on the U.S. national team after Amy Rodriguez who announced she'll be unavailable for the Olympics because she is pregnant. 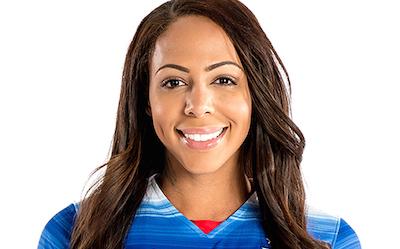 Leroux played four games for the USA at the 2015 Women's World Cup but did not score a goal. She was limited to 11 games (four starts) in 2015 because of an ankle surgery.

On the eve of the 2016 NWSL College Draft, three-team deal sent the 25-year-old Leroux to FC Kansas City, allowing her to reunited with Dwyer, who plays for Sporting Kansas City, and join her fourth club in four seasons. She had been vocal about her displeasure last year when a deal sent her from Seattle to Western New York. She played the first NWSL season with Boston.

“Although we are disappointed that Syd will not be playing for us this season, we are thrilled and excited for her and Dom,” FCKC general manager Huw Williams said in a statement. “Dealing with matters such as these is part of our business. All of us at FC Kansas City are ‘family first’ type of people so we see this as an exciting and joyous occasion.”

Surprise! My plans have changed for this summer. @Ddwyer14 and I are so excited to announce... pic.twitter.com/99knKtCvTO

Rodriguez had her first child in 2013 and missed the inaugural NWSL season with Seattle. She was traded to FC Kansas City and helped it win back-to-back titles. Her absence from the 2016 season while pregnant with her second child was confirmed when she was not included in the U.S. roster for the January camp.

Defender Nikki Phillips (née Krzysik) sat out of the 2015 FC Kansas City season because she was pregnant and will sit out again in 2016.

The absence of Leroux and Rodriguez and retirement of Abby Wambach leave the once-deep U.S. frontline with only Alex Morgan and Christen Press returning from the Women's World Cup championship team.

Leroux's announcement increases the chances that 17-year-old Mallory Pugh could be picked for the 20-player roster for Olympic qualifying in February. The other possibility is Stephanie McCaffrey, who is coming off her rookie season with the Boston Breakers. Crystal Dunn, the 2015 NWSL MVP with Washington Spirit, is listed as a forward on the U.S. roster but has been starting in midfield with Megan Rapinoe sidelined with a knee injury.