Birth-year registration: The transition is upon us

Will my child be changing teams? Will she be playing “up” if she stays with her current team? Will he move to what had been the "younger" team? Will my 12th grader even have a club team during her senior year of high school?

When U.S. Soccer (USSF) last August announced a change in youth soccer to birth-year registration -- a switch from an Aug. 1 cutoff to Jan. 1 -- it prompted many questions and a significant amount of confusion, some of which stemmed from conflicting age charts making the rounds. USSoccer.com's August 2015 story on birth-year registration and small-sided initiatives has more than 700 comments, mostly about registration. Most are critical comments or questions about the switch.

I recently overheard a conversation between a player's mother and his coach. She asked him why the club thought this was a good idea, which she seemed uncomfortable with -- I presume because it meant the boy might be on a different team next season. He said the decision was made by the U.S. Soccer Federation. And then he had to explain what the USSF is. Then he conveyed the USSF's reasoning -- that Jan. 1 is the cutoff date used internationally, thus the date that applies to U.S. youth national teams. That was pretty much all he could come up with, because it's difficult to make the case that a date change will improve player development or combat "relative age effect." (The USSF says the Jan. 1 cutoff will provide "clearer information on player birth dates to combat 'relative age effect.'")

Many of the youth coaches I've heard from know the key reason for the change is, as one of them put it, "To make it easier for national team coaches to scout players." For the detractors of the switch, it's seen as a move that inconveniences many to serve a few.

It seems to me that Jan. 1 is a logical cutoff date for an age group. There's a simplicity to it that I like and I agree with what U.S. Youth Technical Director Tab Ramos said: "The current Aug. 1 cutoff meant that two players born in the same year could be in different age groups. To make it more confusing, different school systems have different cutoff months for going into the new grades. ... This new calendar year system makes soccer easier. If you’re born in a certain year, you belong in that certain age group. Simple."

Not so simple is the transition, which has parents speculating about what it means for their children. There are those who don't like the idea of teams splitting up, something addressed in the original USSF release: "The birth-year registration initiative will not cause the dissolution of age-group based teams that already play together, but will rather give players the opportunity to ‘play up’ with older age-groups."

Some don't like that approach, citing the fact that it would put their teams at a disadvantage playing against other clubs that split teams up. For example, a team that continues fielding 2003s and 2002s competing against a team of only 2002s.

Clubs that have already been moving players up and down throughout the year or have used a pool system don't anticipate as much blowback from parents and players, because they're accustomed to moving between teams. But those tend to be the bigger, highly competitive clubs -- a minority within the American youth soccer landscape. And smaller clubs may see more challenges when it comes to re-arranging or merging teams.

For however inconvenient the transition will be, I'd predict that a few years down the road people will be as comfortable with Jan. 1 as they were with Aug. 1. For now, the transition has club directors and league administrators working overtime.

U.S. Youth Soccer and U.S. Club Soccer sent out statements last week. Both are adopting the USSF’s birth-year registration mandates for the 2016-17 season, a year ahead of the August 2017 implementation deadline mandated by the USSF, whose Development Academy will begin using the age charts below for the 2017-18 season.

“U.S. Youth Soccer, along with other members of the U.S. Soccer Federation, have been collaborating with each other to help ensure that these changes forced by the U.S. Soccer mandates are implemented as efficiently and smoothly as possible,” said U.S. Youth Soccer Director of Coaching Sam Snow. “For teenage players participating in high-level U.S. Youth Soccer programs like the National Championship Series, National League, Regional Leagues and the Presidents Cup, there will be a ripping of the Band-Aid in 2016-2017 per these U.S. Soccer Federation mandates. For players in Zone 1 (ages 12 and under), this impact will likely not be felt until the entire country is to adopt the mandate in August of 2017, but it is important to check with your U.S. Youth Soccer State Association, club or local league on their adoption plan.”

Said U.S. Club Soccer Executive Vice President Christian Lavers: “The U.S. Soccer Federation’s birth-year registration mandate is a significant change for our leagues, clubs and teams. As a sanctioning body, we are trying to help all of our members plan for this change as efficiently as possible, while considering all of the different issues and potential disruptions involved.”

One area that raised concerns was whether the birth-year mandate would leave players at the oldest age groups without a team. For example, high school seniors no longer being age-eligible for U-18s during the spring season, or college freshmen not being able to join their youth teams in summer competition in U.S. Youth Soccer’s U-19 championships.

To address that issue, the new top age group for youth leagues is U-19 while U.S. Youth Soccer has re-labeled its oldest age group U-19/20. 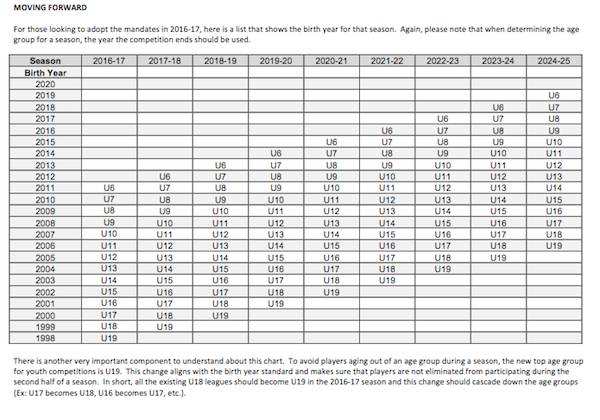 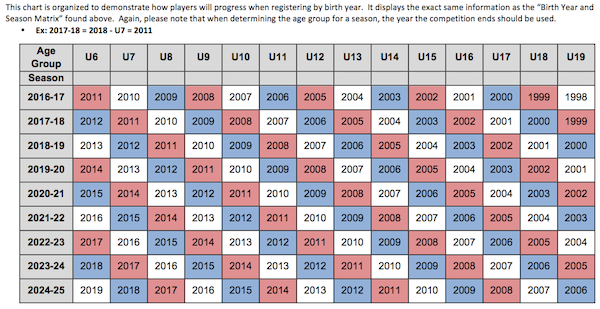 Resources: This USSoccer.com page includes: Age charts and a downloadable Frequently Asked Questions document on "Small Sided Standards & Birth Year Registration" -- and this advice: "It’s important to communicate with your local soccer leaders to avoid misinformation about these initiatives and their objectives. This includes speaking with your coach, club or league administrators, State Association or other U.S. Soccer youth member. If you have additional questions that are not covered in this FAQ document, please feel free to email U.S. Soccer at coaches@ussoccer.org."