Why Christian Pulisic is poised for more playing time at Dortmund

The auspicious debut by 17-year-old Christian Pulisic for Borussia Dortmund on Saturday caused a stir, though little has been made of events before and after which increased the likelihood the young American will receive even more playing time for this massive German club.

Pulisic arrived in Dortmund last January accompanied by his father at the tender age of 16, impressing throughout his first year with the club. While his exploits have U.S. fans eager to chart his national team future, this article will focus on his present prospects at Dortmund, aka BVB. 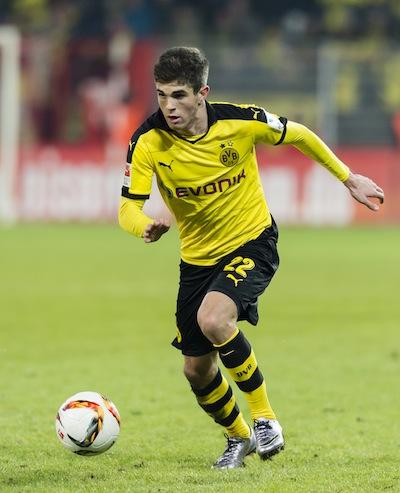 Full disclosure: Dortmund is my favorite club, I follow it far closer than any other, which I hope will help me convey why the young American's abundant technical skill, and even his temperament, are well suited to this team, and its new coach.

Elite company. Dortmund won German titles in 2011 and 2012, then played for the Champions League title at Wembley in 2013, but last year, during Juergen Klopp's final season, the club fell to the Bundesliga’s bottom, before rallying to finish seventh. In September I documented Dortmund's sizzling start under first-year coach Thomas Tuchel, which has continued.

Dortmund is currently on pace for 25 wins and 79 points in the Bundesliga’s 34-game season. Only two teams have ever earned more than 25 wins, and just three former champions ever claimed more than 79 points (even after awarding three points per victory during all 52 Bundesliga seasons).

Pulisic’s poise was evident in his debut, which came late in a scoreless game he helped win. Bayern Munich's eight-point lead may well be unassailable, but that victory closed the gap to five points, before Bayern beat Hoffenheim on Sunday.

Tuchel's tweaks. Dissimilar in personality, Klopp and Tuchel each stand 6-foot-4, were defenders in Germany's lower divisions, and arrived after coaching Mainz. Klopp grew larger than life during his seven years at Dortmund, overshadowing some of the world’s best players. Tuchel’s humility and attention to detail turned the spotlight back on the players.

Tuchel employs a high press, though less aggressive than his predecessor’s, and while Klopp's offense involves chaotic counterattacks off intense pressure, Tuchel's team aims for patience and precision if counters for his lethal attackers aren't available, while Ilkay Gundogan dictates tempo masterfully from midfield.

At 5-foot-8 and 138 pounds, one of the few knocks on Pulisic has been his slight frame, which could’ve prevented promotion under Klopp, but for Tuchel technique and instincts trump confrontation, he’s already replaced rugged veteran Sven Bender in defensive midfield with 20-year-old Julian Weigl, himself technically gifted and carbohydrate challenged.

Tuchel’s troops: Cover less distance per game than any of Klopp’s last four teams, play over 100 more passes per game than those teams, and have higher pass completion rates overall, particularly in the final third.

Comparing skill sets. Pulisic’s rapid ascent to the top of the food chain in Dortmund’s youth ranks -- which have produced the likes of Marco Reus, Mario Goetze and Nuri Sahin -- surprised many, especially those who considered Felix Passlack Germany’s best young player. Passlack, an attacker who was also promoted to finish the season with BVB’s first team, captained Germany’s U-17 World Cup team last summer. Only 5-foot-6 but powerfully built, physically he appears more ready for the Bundesliga, but his technique in training paled in comparison to that of Pulisic, with observers speculating Passlack is currently better suited at outside back.

Now 20, Adnan Januzaj was loaned to Dortmund in August after a bright start at Manchester United, even starting a game for Belgium at Brazil 2014. In spite of his talent and size, he barely saw the field before BVB sent him back midseason. Januzaj’s penchant for holding the ball and trying to do too much did him no favors in Tuchel’s orchestra. Pulisic has no such issues.

This analysis of Pulisic’s strengths and weaknesses cites interesting parallels between his skill set and that of Japanese star Shinji Kagawa, his Dortmund teammate, including the fact both arrived light on the scale but never appeared to ‘play small.'

Kagawa is fast, agile, supremely gifted technically, an excellent dribbler who excels while playing at speed. Pulisic’s strengths lie in all these areas, but the biggest similarity may be their economy of action. Kagawa picks his moments to be aggressive, and if Shinji unveils the spectacular, it’s usually because that’s what circumstances required, Pulisic looks cut from the same cloth.

These characteristics were evident in Pulisic’s longer outings during first-team friendlies in January, and the willingness of BVB’s stars to feed him the ball in tight spaces during his debut implies he hasn't embarrassed himself in training. For all that, composure under bright lights in big moments is never a given.

"I dreamed about these moments when I was younger, and of course I was a little bit nervous, but when the ball comes to your foot, and it all goes away, you’re just focused on the match and trying to win the game," Pulisic said after debuting in front of 81,000 raucous fans at the Westfalenstadion.

If his brief time with Dortmund’s first team is any indication, it does in fact appear Christian Pulisic is at his most serene with a soccer ball at his feet.

This is an enviable quality.

Mutual admiration society. Pulisic has quickly become proficient in German, and his modest nature, off the field, seems to mesh well with Tuchel, his 42-year-old coach with a track record of developing young players, who seems eager to sing the Pennsylvania product’s praises.

"Christian displayed the courage he has in training during the game," said Tuchel. "He has seen that he can keep up with the team and cope at this level.”

Pulisic shared his training mindset that younger players "have to have respect for the first-team players, but also compete for our place in the team on a daily basis".

While Tuchel also commended Pulisic for "always having a smile on his face," and the coach made it known: “It gives me a lot of joy to have him around.” 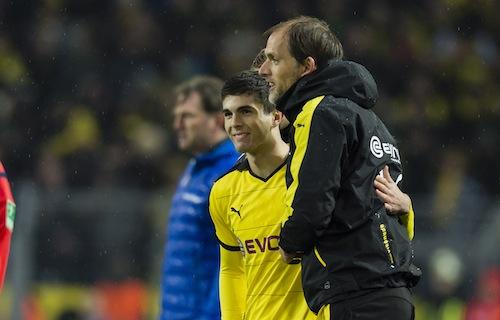 Talent meets opportunity. You could easily make the case there are only three soccer teams in the world whose starting XI's are markedly superior to that of Dortmund (the usual suspects in Madrid, Munich and Barcelona).

Dortmund's imposing attack, which owns a Bundesliga best 52 goals in 19 games, includes: Pierre Emerick-Aubameyang, the league’s top scorer with 20 goals (recently named African Player of the Year), two former German Players of the Year, in Reus and Kagawa, and Henrikh Mkhitaryan, who is the highest rated player in the Bundesliga, per Whoscored.

What Dortmund's attack doesn't have is depth.

Colombian striker Adrian Ramos has played poorly in two seasons at BVB, and far worse on the flanks, leaving summer addition Gonzalo Castro as the only quality bench alternative in attacking midfield or on the wings after the club sold Jonas Hofmann to Borussia Monchengladbach and ended Januzaj's loan over the winter break.

It was lost on no one in Dortmund that Pulisic's debut came at the expense of Ramos, and few will forget how much better BVB functioned without the out of form striker clogging up the wing.

After kicking a few tires during the transfer window, Dortmund allowed it to close Monday without adding an attacker (or two), surprising many -- and increasing the likelihood that Pulisic’s impressive cameo will be followed by meaningful minutes in the season's second half.  There’s little chance Pulisic’s excellent January affected BVB’s transfer business, but informed sources now agree, it’s hard to reach any other conclusion but this.

A 17-year-old American appears to be the second option off the bench out wide, and possibly in attacking midfield, at one of Europe’s biggest clubs for the remainder of the season.

For U.S. fans worried if this is too much too soon -- we should all take solace in the fact this kid is one cool customer.