The most experienced American coach of the lot, with so much to admire about him ... what can have possessed him?

Obviously, he knows Nigel de Jong’s unpleasant persona as a player. How can he not know? The lowlights of de Jong’s career are, quite frankly, disgusting. The violent karate kick delivered into Xabi Alonso’s rib cage during the 2010 World Cup final is the most spectacular, the one that most people will remember. 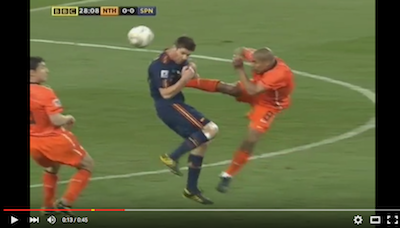 But there is much more -- and much worse -- to de Jong’s years as a midfield monster. The damage he willfully inflicted on opponents, for instance. The two broken legs. That is two more than the vast majority of players ever achieve. But de Jong racked up his duo in just one year, 2010, the annus terribilis in which, at the age of 25, he sealed his claim to be the ultimate psoccopath.

One of his victims was the French winger Hatem Ben Arfa -- sent to hospital with his left leg mangled, both the tibia and the fibula broken. Arfa was out of action for 10 months. During which time de Jong played on.

But the incident that surely ought to have given Arena pause before signing de Jong happened earlier in 2010, during a friendly game between the Netherlands and the USA. Then it was the USA’s Stuart Holden who bore the impact of one of de Jong’s ferocious tackles. Another broken leg -- Holden was out of action for six weeks. Netherlands coach Bert Van Marwijk promptly suspended de Jong from his team, saying “It was a wild and unnecessary offense. I have a problem with the way Nigel needlessly looks to push the limit.” But de Jong was soon back in action. Of course he was.

For America’s top coach to invite de Jong into MLS is a cruel slap in the face for Holden. No doubt Holden will be nice about things, not wanting to be seen as vindictive. What he really thinks -- well, how much thought did Arena give to that?

De Jong’s record is appalling, and is well known to be appalling. This is what Wikipedia has to say: “In December 2013, Spanish football website El Gol Digital ranked de Jong 10th in its list of the world's dirtiest footballers." Last December the respected French sports newspaper L'Équipe called De Jong one of the three most violent players in the world.

Clearly, de Jong has talents that appeal to coaches. He has spent his career at top clubs -- Ajax, Hamburg, Manchester City, Milan, and he has won titles. But if you want whatever it is that de Jong brings, there is a price to pay. The thuggery. Too many coaches -- even Van Marwijk relented -- would appear willing to ignore, or accept, the violence. Unless, of course, the thuggery is the very reason they want him.

That is a question that Arena needs to answer. Why on earth has he signed this dangerous midfielder who has been called The Destroyer and The Lawnmower? What is the attraction? Listening to Arena’s comments on de Jong is simply a waste of time. Of course the mayhem is not mentioned. Anyway, I’ve heard these comments a thousand times from a thousand coaches about a thousand players: “a guy that's got a ton of experience and is an outstanding defensive midfielder ... he can be a real anchor for us in the midfield, can complement the players around him, and we expect him to be a real good player.”

Assistant coach Dave Sarachan seems unaware of the irony in his words: “you count on him to be disciplined.” The guy who delivered a flailing high kick to an opponent’s chest in the middle of a World Cup final? Disciplined?

As far as I am concerned all of that is irrelevant anyway. It matters not whether de Jong turns out to be a huge star or a monster flop. He should not be here. Arena did not have to sign him. There are plenty of players around who know how to play good soccer without sending opponents to hospital. This raises the ugly possibility that de Jong is being signed because he comes cheap. Surely Arena would not be that cynically venal, would he?

When Holden was recovering from his broken leg, he remarked: “I would not accuse him [de Jong] of intentionally trying to break my leg, I would just describe it as a reckless tackle. There was a lot of controversy, but you do get reckless tackles in football sometimes."

You do. It’s just that too many of them happen when de Jong is around. He has had his chances to clean up his act, more than one, but he is a recidivist, and he has been forgiven too often. If he’s going to get yet one more chance to maim someone, it should not be here.

In theory, Commissioner Don Garber could nix the deal. But he’ll stick to his belief -- probably correct -- that he shouldn’t be telling coaches which players to sign. In which case, Garber has a right to expect that the coaches will not make dreadful decisions like this one. And Holden should not be put in the uncomfortable position of having to pretend that everything is just fine.

Do I have to reveal a personal interest? Very well then. Arena is the American coach for whom I have most respect. I like the man, have always found him knowledgeable, willing to talk, and to talk sense. With humor. Now I have this utterly disgraceful signing to confront, and I’m forced to thoroughly disagree with every aspect of it.

There should be no place at the Galaxy, or in MLS, for a player with de Jong’s unsavory record. There is nothing, absolutely nothing, to be said for the deal. Bruce, you’ve made a truly awful error.

los angeles galaxy, mls
44 comments about "Arena and the Lawnmower: Why, Bruce, why ...?".
Read more comments >
Next story loading