MLS's four representatives in the Concacaf Champions League quarterfinals -- the LA Galaxy, Seattle, Real Salt Lake and D.C. United -- face daunting tasks. Just a month into preseason, they will have to take on Mexican opponents in mid-season form. Here's how the MLS teams look less than two weeks before the first legs are played.

The four MLS clubs will have played both legs of the quarterfinals before the MLS season kicks off on March 6.

The early start means coaches will have had to accelerate their preseason preparations by 10 days and give their first-string players more minutes than they might otherwise be giving them at this stage as they're usually still evaluating draft picks and trialists to fill out their rosters.

Here's how the MLS teams look less than two weeks before the first legs are played.

CHALLENGE: Incorporate its three big international signings -- Jelle Van Damme, Ashley Cole and Nigel De Jong -- into its lineup. More important, get Cole, who hasn't played in more than a year, and De Jong, who hasn't played since December into some kind of shape.

NEWCOMERS: The Galaxy could start as many as five newcomers. Besides Van Damme, Cole and De Jong, Dan Kennedy will start in goal, and young Ghanaian Emmanuel Boateng could start in midfield in place of Sebastian Lletget, who is sidelined with a groin injury. Mike Magee is back for his second tour with the Galaxy, while former Chicago teammate Jeff Larentowicz is still recovering from off-season surgery for a sports hernia. 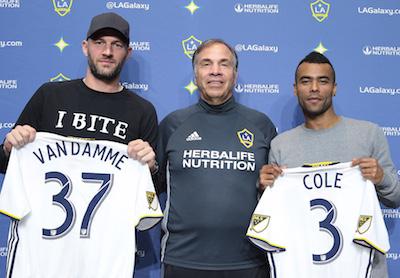 CHALLENGE: The Sounders are working on a new 4-3-3 formation that will take time for the players to learn. On Tuesday night, Seattle played Mexican second division club Celaya in Tucson and, according to Coach Sigi Schmid, looked "horrible" for the first 20-25 minutes. The new formation will put a lot of pressure on veteran Osvaldo Alonso, who faces competition from second-year pro Cristian Roldan.

NEWCOMERS: Jordan Morris joined the Sounders at the beginning of the week after splitting time in January with Werder Bremen in Turkey and the national team in training in Carson. Young Trinidadian Joevin Jones, acquired from Chicago, is an upgrade at left back.

CHALLENGE:  Juan Manuel Martinez, acquired in the middle of the 2015 season, Yura Movsisyan, back after six seasons in Europe, and Joao Plata could be one of the most potent attacks in MLS, but it will take time for them to click. Of bigger concern for the series against Tigres is the uncertainty in the backline, where RSL is still looking for a center back to replace Chris Schuler. It thought it had a replacement but a deal fell through at the last minute. It has Ghanaian Jerry Akaminko in camp for a tryout.

NEWCOMERS: Nigerian Sunny Obayan should alleviate some of the pressure on Kyle Beckerman to shoulder the defensive duties in midfield, while Movsisyan is a proven goal scorer up front.

CHALLENGE: The signing of 21-year-old Argentine playmaker Luciano Acosta is imminent. He's a big catch for United, but Coach Ben Olsen will have less than two weeks to get him up to speed. With Bill Hamid sidelined with a knee injury, Olsen will have to go with Andrew Dykstra in goal. He does have CCL experience, having started all four games in the group stage.