The heading ban -- how refs should respond

Last year, the U.S. Soccer Federation announced a ban on heading for players age 10 and younger. Last week, the U.S. Soccer Referee program sent out a memo on how the rule should be implemented:

“When a player deliberately heads the ball in a game, an indirect free kick (IFK) should be awarded to the opposing team from the spot of the offense. If the deliberate header occurs within the goal area, the indirect free kick should be taken on the goal area line parallel to the goal line at the point nearest to where the infringement occurred. If a player does not deliberately head the ball, then play should continue.”

The U.S. U-17 girls national team will win the 2016 U-17 NTC Invitational in Carson, Calif., with a victory or tie against Japan on Monday thanks to 2-0 victories over South Korea on Saturday and England on Thursday.

The Colorado Rush’s Civana Kuhlmann scored twice in the last eight minutes in the win over England. She was assisted by Real Colorado’s Jaelin Howell on an 82nd minute strike and Cal Blues' Kennedy Wesley in the 87th minute.

Wesley, along with Jordan Canniff (Richmond United) and defender Kate Wiesner (Slammers FC), is one of three 14-year-olds (2001s) in Coach B.J. Snow's 20-player squad, which is preparing for the 2016 Concacaf U-17 Women's Championship in Grenada March 3-13.

The top three teams from the Concacaf championship will qualify for the 2016 U-17 Women's World Cup in Jordan Sept. 30-Oct. 21. 1999-born players comprise the majority of Snow's roster, while five are 2000s.

In the 2-0 win over South Korea, Real Colorado’s Sophia Smith, with a tap-in on a pass from Tophat’s Rachel Jones, and Karina Rodriguez (So Cal Blues), with a volley off a cross from Sydney Zandi (Penn Fusion), struck first-half goals.

In the NTC Invitational’s other games, Japan tied England, 1-1, and beat South Korea, 5-0.

The USA-Japan game will streamed live at ussoccer.com Monday at 6 p.m. ET. 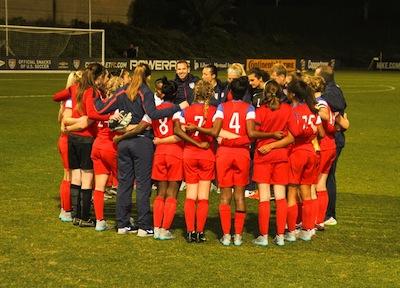 Eighteen players from 18 clubs were named to Coach Gerry McKeown's squad for the 2016 id2 National Selection International Tour to Spain Feb. 20-March 2. The team, comprised of 16 players born in 2002 and two in 2003, will face their counterparts in the youth programs of Valencia, Villarreal, Espanyol and Barcelona.

The two 2003s are midfielders Daniel Edelman and Thomas Musto.

SAN FRANISCO CHRONICLE: The Obama administration has announced a multi-agency federal study to look into the safety of recycled tire material used on synthetic turf fields.

"We know people are concerned about artificial turf fields, and players and their families want answers,”  said EPA spokeswoman Laura Allen. “Limited studies have not shown an elevated health risk from playing on fields with tire crumb, but the existing studies do not comprehensively evaluate the concerns about health risks from exposure.”

The U.S. Environmental Protection Agency (EPA), the Consumer Product Safety Commission and the Agency for Toxic Substances and Disease Registry at the Centers for Disease Control will carry out the study.

The Synthetic Turf Council, an industry group, said in a statement it hoped the new study would “settle this matter once and for all.” US to mount multiagency study of health risks of synthetic turf