USSF to launch a girls Development Academy in 2017; ECNL plans to forge ahead

The U.S. Soccer Federation is set to launch a Development Academy (DA) for girls in August 2017, replicating the DA for boys that it launched in 2007.

That the Federation hadn’t launched a girls DA earlier was attributed mainly to a couple of reasons.

One being that because the U.S. women’s national team was already a world power, there was more urgency on the boys side. Secondly, the U.S. Club-sanctioned ECNL -- the Elite Clubs National League – launched in 2009 and in many ways served the U.S. national team program (and college scouts) the way the DA has for the boys.

“We went in there with the idea that we wanted to collaborate with the Federation to create anything that would raise the standards of the girls game and continue to improve the girls game,” said Christian Lavers, the president of the ECNL, which has 79 member clubs. “The Federation’s position was they considered collaborating with the ECNL [but] determined that they could raise standards in the game and change the game in all the ways they wanted to better and faster without us. …

“I can’t speak to why that is. In the world I live in, collaboration is almost always a valuable thing in multiple ways. …  If something changes with respect to the Federation’s position, that’s great. But it was pretty clear in that meeting that collaboration and working together was something that they didn't want and did not feel was helpful. ...

"The input and support and buy-in of the ECNL clubs and coaches and the people in the grass-roots were not really a part of [the Federation's] process."

Lavers said the USSF representatives acknowledged that the ECNL had “done a lot of good things in the girls game and raised a lot standards.” Lavers pointed out that the ECNL has tried "very hard" to implement standards that the U.S. Soccer technical staff has said were important in girls development.

The ECNL plans to continue, which means the girls DA will have competition for the nation’s elite players unlike it faced on the boys side.

One major difference between the ECNL and the DA is that ECNL is age-pure; member clubs field teams at the five age groups, from U-14 to U-18. The DA teams field U-14, U-16 and U-18 teams. The DA bans players from participating in high school ball. The ECNL allows its players to play high school. 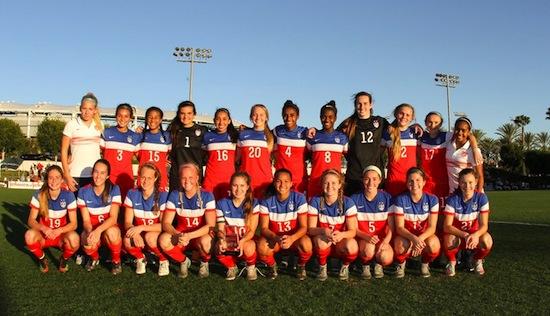 The USA, which also beat England (2-0) and South Korea (2-0) at this year’s edition, has a perfect 9-0-0 record over the past three NTC Invitationals.

Against Japan, the USA went ahead 2-0 after 25 minutes. Ashley Sanchez scored in the 13th minute after meeting a deflected cross from fellow So Cal Blues player Kennedy Wesley.

Twelve minutes later, Civana Kuhlmann, the Colorado Rush forward who scored U.S. both goals against England, struck a sharp cross that a Japanese player knocked into her own net.

Japan outshot the USA, 12-8, but the teams finished even on shots on goal (7-7). U.S. keeper Laurel Ivory, who beaten in the 30th minute, finished with six saves to counterpart Riko Ushijima's five. Ivory, of Florida club Sunrise Sting, was making her second appearance for the U-17s.

Snow’s team is preparing for the the 2016 Concacaf U-17 Women's Championship in Grenada March 3-13. The tournament will determine the region’s three qualifiers for the 2016 U-17 Women's World Cup in Jordan Sept. 30-Oct. 21.