De Jong: 'There's never been a problem in my career'

Given his history for violent play -- he broke the legs of U.S. midfielder Stuart Holden and French midfielder Hatem Ben Arfa in 2010 -- it should come as no surprise that the LA Galaxy's Dutch signing Nigel de Jong grew up watching the NFL.

His favorite team? The Pittsburgh Steelers.

"Can I say that here?" he asked at Tuesday's Galaxy press conference, where he was introduced to the Los Angeles media.

He's always kept up with American sports, so he knew that Los Angeles was again an NFL town, welcoming the Rams in 2016.

“I’ve been a big sports fan since I was little," he said. "That made it easier for me because I love American sports, I always followed them in Europe. It was difficult to follow because it was always during the night, lot of the games, but I would stay up and watch those games. I’m a big fan. I’m glad I don’t have to stay up so late anymore.” 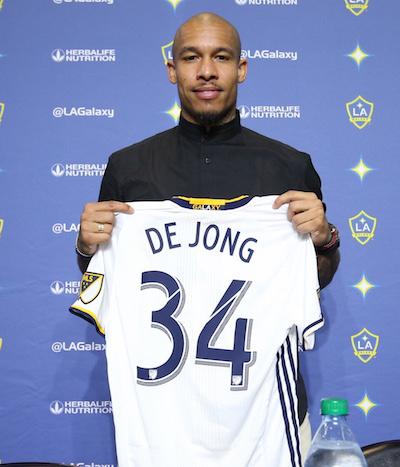 “I think that it helped a lot that I’m still a fan of the sport culture," he said. "Since I was young, I always watched the different sports and enjoyed the way that America embraces sports are way different than Europe. I liked that. I came here a couple of times for holidays and my rehab [at StubHub Center in 2013], and I had a good feeling of how the culture really is. That’s why I always said that if I had the opportunity to come to America, then I would do it. Luckily, the opportunity came, and it was first on my list even though I had other European offers.”

In his fourth season with AC Milan, de Jong played just five Serie A games. His last start came on Dec. 13 when he was sent off for a foul on Hellas Verona's Leandro Greco that also resulted in a penalty kick in the 1-1 tie.

The ejection was the first straight red card in de Jong's 14-year pro career. (His only other red card was for two yellow cards in a UEFA Cup match with Germany's Hamburg in 2006.)

De Jong's career is perhaps best remembered for the red card that was not called --  only later did English referee Howard Webb say he should have sent off de Jong at the 2010 World Cup final for a kung-fu kick to Spanish star Xabi Alonso's chest -- but his reputation is something he tried to play down.

"It’s not about the reputations," he said. "It’s about the winner’s mentality that you have to show on the pitch. Because at the end of the day it’s about winning. To me, there’s never been a problem in my career.