CCL: Sounders hope to give themselves shot at Azteca

The Seattle Sounders face a tall order when they battle defending champion Club America in the quarterfinals of the Scotiabank Concacaf Champions League. The Sounders' goal is to keep America off the scoreboard and give themselves a chance in the second leg next week at Azteca Stadium.

The Sounders will debut a new formation (4-3-3) and play on a new turf surface ("a little easier on your joints," according to Clint Dempsey).

Seattle's new formation will put a ton of pressure on veteran Osvaldo Alonso in central midfield to hold off the America attack. Two changes in the Sounders' lineup will be young Trinidadian Joevin Jones at left back, where he will be a major upgrade on a trio of players Sigi Schmid used there in 2015, and rookie Jordan Morris, who takes over for departed Obafemi Martins. 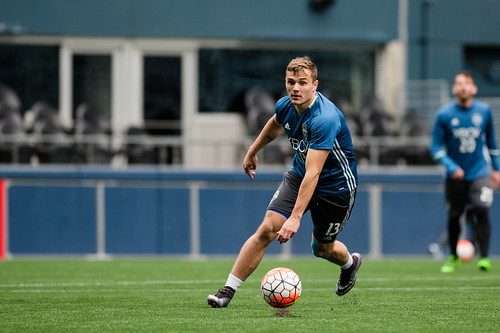 Schmid says the key is shutting down America in the first leg.

Schmid minimized the importance of the turf.

CLUB AMERICA. Las Aguilas currently sit in fourth place after seven games of Liga MX's Torneo Clausura but will be without three starters for the first leg against Seattle. Goalkeeper Moises Munoz and forward Dario Benedetto were injured in Saturday's 3-3 draw with Mexico City rival Cruz Azul, while Paraguayan William Da Silva is cup-tied, having played for Queretaro in the group stage.

Benedetto is the big loss, having scored a hat trick in the 4-2 win over the Montreal Impact in Montreal that allowed Club America to win the 2015 Concacaf Champions League, 5-3, on aggregate. America still has veteran Mexican international Oribe Peralta, who shared the 2015 Golden Boot with Benedetto (seven goals in the competition).