So bad, all you can do is laugh

Manchester City's shootout victory over Liverpool in the Capital Cup was what we now almost expect from grand finals -- disappointing, short on good soccer, miserly on goals.

The Man City and Liverpool fans will have their own views on whether the better team won. That is not my concern here. I’m taking a look at the one area where the game did excel, the moment when it memorably zoomed to the top of the class in a category which every soccer-involved person is familiar with: that of bad referee calls. This one almost hilariously bad.

Actually, this was a non-call, for which we can thank referee Michael Oliver. In the 63rd minute Man City’s Sergio Aguero broke away and raced into the Liverpool penalty area, with the ball firmly under control. Defender Alberto Moreno caught up with him just inside the area but as he prepared to tackle, Aguero cut the ball sharply to his left, leaving Moreno staring into space, with Aguero now unhampered, on the move behind him, toward goal.

In effect, Aguero had maneuvered Moreno out of the play. Moreno did not give up. He jumped backward moving him slightly closer to the rapidly departing Aguero, and then reached out backward with his left leg. The leg, inevitably, got in Aguero’s way, just after he played the ball forward. Moreno’s leg did not touch the ball, but it did trip Aguero. As Aguero went down, the ball was whacked away by over the sideline by Nathaniel Cline.

Referee Oliver was perfectly positioned -- maybe 5 yards away, with no other players obscuring his sight line. He must have seen everything I have described. Yet he ignored everything and signaled for a throw-in to Man City. 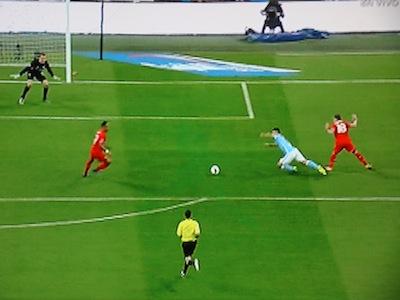 Referees are usually -- and quite rightly -- granted a good deal of sympathy because they have only a second or two to make a decision, while their critics can repeatedly study replays. Yes, I’ve looked at the replays -- very good replays from several angles -- but this is one case where I didn’t need to. They show exactly what I was sure they would: that Moreno did not get the ball, and that he tripped Aguero. 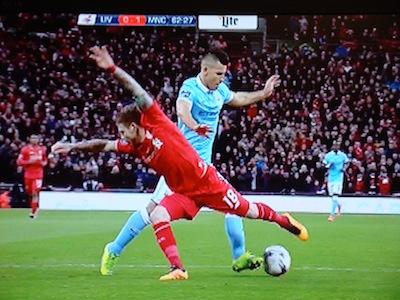 Moreno, with his back to the ball, stretches out his left leg behind
him, into the path of Aguero.

I was sure of that because all of the action was plain to see. Oliver, because of his position would, in fact, have had a better view of it than TV showed to me.

So Oliver saw Aguero completely fool Moreno by cutting the ball away from him. He saw Moreno, now facing away from Aguero, jump backward and stretch his left leg out backward, into Aguero’s path. Both of those actions were taken blindly, because Moreno had his back to Aguero. 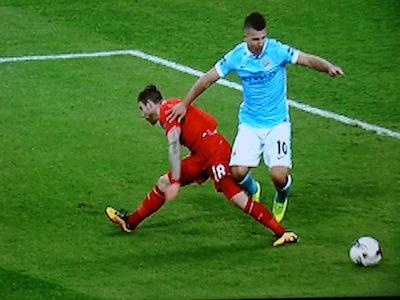 Moreno's leg and body make contact with Aguero, bringing
him down.

So what on earth did Oliver imagine he was seeing? How could he ignore a flagrant trip by a player who was not even a position to see what he was doing?

Maybe he thought Aguero dived? But that would have meant a yellow card and a free kick to Liverpool. There was no card, and Man City got a throw-in.

What we do know is that referees do not, on the whole, particularly like giving penalty kicks. Especially is that true in big games. Oliver certainly managed to avoid giving a PK here -- even worse, to call the PK would also have introduced the possibility of red-carding Moreno for denying an obvious goalscoring opportunity.

Oliver, then, thought -- or chose to believe -- that Moreno, despite having his back to the play, had managed to poke the ball away from Aguero. But given Oliver’s perfect view of everything, there can be no excuse for him not seeing that it was Aguero, with his left foot, who got to the ball first.

Maybe Oliver was relying on what must be the least acceptable of the referee’s explanations: in situations where doubt exists, the benefit is given to the defense.

I have asked a lot of people about that -- including top FFA referees -- and not one of them has been able to tell me where that tradition comes from (it is certainly not in the rules) nor have they been able to justify it.

Anyway, there was no room for doubt in this situation. The foul was simply way too obvious, and no amount of silly-clever rationalizing (about whether Aguero dragged his foot into Moreno’s leg, for instance) is going to alter that.

I’m in total agreement with the Daily Mail  that referee Oliver “missed one of the most obvious penalties this ground [i.e. Wembley Stadium] will have seen.”

england, referees
9 comments about "So bad, all you can do is laugh ".
Read more comments >
Next story loading