There isn’t a place on earth where a little girl or an old man wearing a Barcelona jersey would raise an eyebrow anymore. Barcelona and Lionel Messi have captured the world’s imagination unlike any team since Michael Jordan’s Chicago Bulls. A fusion of individual and cumulative genius extending beyond sport, gender and demographics, blurring lines to create a living, breathing drama starring James Dean  in cleats, soft-spoken and constantly scoring.

I was quite pleased with myself when I wrote that opening paragraph, in 2013, believing I'd somehow encapsulated Barcelona's magic in the only way that seemed possible, by using different subjects altogether.

But less than three years later you’d now only have to swap teams and pint-sized protagonists to see that stanza apply to Steph Curry and the Golden State Warriors.

A joyful doppleganger has developed in the most unlikely of places, Oakland, California, where Curry's current status as the NBA’s cuddliest alpha dog arrived so quickly and without similarity to previous greats, there appears to be only one valid comparison, Barcelona and its resident genius.

It's a small world after all. This week, a front page article by the New York Times efforts to categorize the escapades of basketball's reigning MVP included Curry being compared to Babe Ruth and inspired the delightful phrase "a butterfly with a jump shot," while both the The Guardian and The Telegraph in London ran features scribbling frames surrounding one simple truth -- comparisons between Messi and Curry are no longer ludicrous, with the artist themselves embracing one another.

Gerard Pique, a World Cup champion and one of many basketball aficionados on Barcelona, shared his thoughts with his 12 million followers when asked if Curry was the Messi of basketball. Ever the elegant defender, Pique sidestepped a direct comparison before his inner art critic likened Golden State’s three NBA All-Stars to Barcelona's historically great trio of gunslingers.

While the Messi, Curry comparisons are already rampant, Neymar's creativity and exuberance are probably closer to Leo and Steph stylistically than the stoic demeanor and textbook jump shot of Klay Thompson, who won the 3-point shooting contest at this year's NBA All-Star game (as Curry did the year before).

Pique nailed it when comparing Luis Suarez -- the Uruguayan star with prominent teeth who spends his free time giving out candy to babies for the sole satisfaction of stealing it back (according to reliable sources in Madrid) -- to Draymond Green, the Warriors irascible emotional leader from Saginaw, Michigan, who guards all five positions while barking orders at referees, teammates and coaches. (No word yet on the rumored pay-per-view event where Luis steals Draymond's candy, and millions pay to see what happens next).

With social media allowing expressions of exasperation in real time, LeBron James, one of the best defenders in NBA history, and de facto best basketball player in the world for nearly a decade -- himself previously reluctant to acknowledge Curry's startling leap into a stratosphere 'King James' is unfamiliar with -- echoed the sentiments of his contemporaries, and every opponent Leo Messi has ever faced, with this nod to an adversary for whom there is no context.

@StephenCurry30 needs to stop it man!! He's ridiculous man! Never before seen someone like him in the history of ball!

The boy kings. Curry turns 28 a week from Monday, the same age as Messi. Their youthful appearance, size, and body language often fools us into thinking gleeful little boys are befuddling and bamboozling the world’s best players. Messi’s transcendence was identified at a young age, but Curry wasn’t even offered a basketball scholarship by a major conference out of high school, both players have overcome injury troubles, and a perception they are vertically challenged.

“I love watching him play. I'm a big fan. You never know what he's going to do at any particular moment. When he's on TV, everybody is glued in because, as soon as he gets a touch with the ball, something special could happen. And you've got to appreciate that kind of talent,” Curry recently said of Messi, a statement which holds true for either.

Curry found the opportune time to send Messi a signed jersey, when Leo went over 30 million Instagram followers in December. (Steph and his brother Seth Curry, who plays for the Sacramento Kings, both wear No. 30 because their father Dell Curry, himself a deadly shooter, wore it during his 16-year NBA career.)

Messi showed off his new gift during an Instagram post that included the kind of good-natured smack talk that only global sports icons are capable of. Telling Curry: “As soon as you get to 10 million I’ll give you mine.”

(Curry should soon have his No. 10 from Barcelona, as his Instagram followers leaped from 5.9 to 8.6 million since then. Messi’s is now over 38 million.) 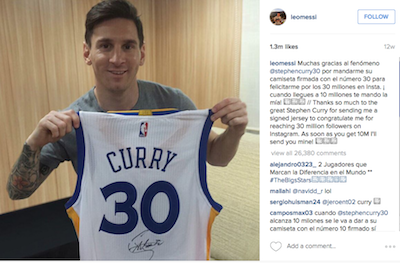 Numbers. The defending NBA champion Warriors are 54-5 this season, chasing the hallowed mark of Jordan’s 1995-96 Bulls, who went 72-10. Curry just broke his own record for 3-point shots, doing so with 29 percent of the season remaining, and Curry, the NBA’s reigning MVP has improved so dramatically he is on pace to break efficiency records set by Wilt Chamberlain in 1963, and well on his way to becoming the first unanimous MVP in the history of the NBA.

Barcelona, which has won four of the last 10 European Cups, is attempting to become the first team ever to defend its UEFA Champions League title, and the first team in soccer history to win back-to-back trebles (as domestic cup champion, league champion and European champion). Cataloging the goal-scoring records of Messi is an article unto itself, as almost every goal Messi scores only extends his own records in some shape or form.

Catalonia to California. While soccer has long been the world's game, most basketball experts point to Barcelona and the 1992 Olympics as the birth of basketball’s global appeal. The ‘dream team' from the U.S. captivated the world with stars like Jordan, Larry Bird and Magic Johnson; it also included Chris Mullin, a Hall of Fame shooter from Golden State.

In the summer of 2014, Curry and Thompson played multiple games in Barcelona on their way to winning Gold Medals at the FIBA Basketball World Cup in Spain. In June, Messi and Barca teammate Javier Mascherano will be in Santa Clara with Argentina to play reigning champion Chile in the Copa America Centenario. If the Warriors reach this year’s NBA Finals, Game 2 will be played the night before in the East Bay, home to Soccer America since 1971, and just 45 minutes north, with both events being beamed to Barcelona, and to fans across the world.

Being a fan means we all get to decide for ourselves what 'best' means, whether we value entertainment over results, and if our or loyalties lie with players or teams. Having rooted for Golden State my whole life, in my eyes, no Warrior will ever be greater than my boyhood idol Clifford Ray, an undersized center that never once averaged 10 points, or made an All-Star game.

And I don't care if they gene splice Jordan with Mark Twain and Vincent Van Gogh, I will never acknowledge any athlete, artist or reality TV presidential candidate worthy of being mentioned in the same breath as His Holiness Andres Iniesta --- the Barcelona captain and Spanish World Cup hero lovingly referred to as 'El patrimonio de la humanidad,' a treasure of humanity, by his countrymen. (If you don't like Andres Iniesta that makes you a bad person, it's one of life's simplest litmus tests.)

While basketball's shooting savant will need both his priceless hands to count any future Ballon d'Or awards won by Messi, the joy of watching them and their teams perform is undeniable, and we should all be grateful the merits of embracing either will never be 'settled on the field' --- leaving the beauty of their art limited only by our own capacity to celebrate it.

They are simply the greatest shows on earth.