A road win by Toronto FC as it embarks on an eight-game road trip to start the season and a D.C. demolition by the LA Galaxy lodged those teams near the top, while another away win by a Canadian team put Montreal in the first five.

Power Rankings are computed from a team’s record in MLS play.

1. PORTLAND (1-0-0). The defending champs started the season in style, parlaying goals by go-to guys Diego Valeri and Fanendo Adi into a 2-1 replay of MLS Cup 2015. Dairon Asprilla didn’t score but with two powerful shots forced good saves, the second of which rebounded for Adi to nudge over the line.

2. FC DALLAS (1-0-0). Fabian Castillo’s goal in the 21st minute punctuated an opening period during which FCD opened up the Union back line several times, and Max Urruti blasted home the clinching goal of a 2-0 victory after knocking the ball loose for Mauro Diaz to serve into his path. Carlos Gruezo and Maynor Figueroa were solid in their FCD debuts; a strong tackle by Gruezo started the first-goal sequence.

3. TORONTO FC (1-0-0). A shutout victory on the road! TFC had only two of those last season -- at Orlando City and Philadelphia -- and needed just one save from newcomer Clint Irwin to get this 2-0 victory at Red Bull Arena. Marky Delgado capped off an impressive display by netting a clinching goal in stoppage time. Up ahead are seven more games away; last year TFC went 3-5-0 on the road to start the season and lost the home opener. It's very early but this doesn't look like a 3-6 team.

4. LA GALAXY (1-0-0). Another lackluster display by Giovani dos Santos gave way to Mike Magee’s entry at halftime; two goals, an assist and a drawn penalty kick later, the Galaxy was a 4-1 victor. Away from the fireworks of Magee’s return to LA, Ashley Cole did well, defender Daniel Steres scored his first professional goal, and backup keeper Brian Rowe held the fort after an injury forced out Dan Kennedy.

5. MONTREAL (1-0-0). The turf boycott imposed by Didier Drogba didn’t faze the Impact, which prevailed in Vancouver for the first time, 3-2. Ignacio Piatti matched Magee with two goals and an assist and Dominic Oduro got one of each. A spectacular save by Evan Bush helped Montreal keep the lead it took when Piatti slalomed past three opponents to smash home a shot in the 19th minute. Drogba, whose knee swells up when he plays on turf, will train in Northern California for another week or two.

6. SPORTING KC (1-0-0). After it went up a man late in the first half, anything less than victory would have been a failure, and SKC didn’t look that dominant but still beat the Sounders, 1-0, on a shot by debutante defender Nuno Andre Coelho that should have been saved. SKC also needed two excellent saves by goalie Tim Melia yet it did post a road win in a very tough venue.

7. NEW YORK CITY (1-0-0). A superb goal by Thomas McNamara kicked off the highest-scoring weekend (36 goals) in MLS history, and NYCFC needed goals by Tony Taylor, Khiry Shelton and Mix Diskerud to hold off Chicago, 4-3. Head coach Patrick Vieira started his MLS tenure with a 4-3-3 formation headed by David Villa flanked by Taylor and Shelton, and McNamara with Diskerud and Andrea Pirlo in a midfield missing an injured Frank Lampard. Despite the final scoreline, a big save by Josh Saunders one-v-one against Gilberto proved to be vital. 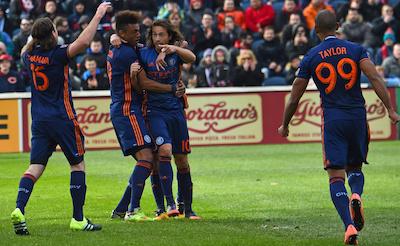 8. SAN JOSE (1-0-0). A headed goal by Chris Wondolowski just 19 seconds into the second half carried the Quakes past Colorado, 1-0. Five saves by keeper David Bingham and several crucial defensive plays, including a challenge by Shea Salinas that deflected a shot onto the post, preserved the shutout victory. Debutant Alberto Quintero assisted on Wondo’s 110th MLS goal.

9. NEW ENGLAND (0-0-1). The Revs kept rallying to earn a 3-3 tie in Houston. Daigo Kobayashi headed home the last equalizer with the Revs’ last touch of the game. Diego Fagundez scored in the third minute with another golazo and Charlie Davies’ goal re-tied the teams at 2-2. A backline mixup between Jose Goncalves and Bobby Shuttleworth gifted the Dynamo its first goal and a fluffed clearance set up the second. All in all, an opening game rife with both good and bad.

10. REAL SALT LAKE (0-0-1). RSL started out with the quintessential away tie that feels like a loss. Two goals by Joao Plata in Orlando were matched by the host in stoppage time for a 2-2 tie. Victimized on the second goal was defender Jamison Olave, who failed to clear a long ball played over the top.

11. COLUMBUS (0-1-0). Rather than gaining revenge for a 2-1 defeat in the 2015 MLS Cup final as the home team, Crew SC fell in Portland by the same score. Gonzalo Higuain nailed a brilliant bicycle kick that tied the game, but another great effort came back off the post. Keeper Steve Clark pulled off an excellent save yet failed to stop a free kick that came through a charge of players and then gave up an unlucky rebound.

12. SEATTLE (0-1-0). A straight red card dispatched Oriel Fisher just 41 minutes into the Sounders' home opener that yielded a 1-0 loss yet the Sounders nearly scored twice in the second half before SKC got its winner. Captain Brad Evans left the game clutching a shoulder injured when he tumbled over Dom Dwyer and landed on his head.

13. ORLANDO CITY SC (0-0-1). The Lions are turning into Los Sounders del Sud; a crowd of 60,147 gathered in the Citrus Bowl and went home delirious that stoppage-time goals by Cyle Larin and Adrian Winter 40 seconds apart had rescued a 2-2 tie with RSL. An attack without Kaka (strained thigh) produced 14 shots and earned its late reward in thrilling fashion. Brek Shea whipped in a nice ball from the left flank that Larin guided into the net and Winger chased down desperation long ball to equalize.

14. HOUSTON (0-0-1). Forward Will Bruin is known more for finishing shots than providing them, but with two nice passes he set up goals by which the Dynamo took a pair of one-goal leads that were squandered to the Revs in a 3-3 barnburner. Newcomers Cristian Maidana and Andrew Wenger were lively and dangerous as they each scored a goal and goalie Joe Willis twice pulled off excellent saves.

15. NY RED BULLS (0-1-0). The performance of defender Gideon Baah -- signed to replace Matt Miazga -- in his MLS debut was about the only bright spot of a 2-0 home loss inflicted by TFC, which exploited NYRB’s notorious susceptibility to counterattacks. A pushing foul by Kemar Lawrence gave away a penalty kick TFC converted for the winner. Lloyd Sam squandered a great chance by firing over the crossbar and Mike Grella hit the side-netting from a narrow angle.

16. VANCOUVER (0-1-0). The league’s joint-top defense last season (36 goals allowed) couldn’t contain Piatti and Oduro, who scored chasing down a long ball that keeper David Ousted failed to clear with his feet outside the penalty area. Three players could have stopped Piatti on the dribble leading up to his first goal but didn’t. Jordan Harvey crashed the far post to knock home a swerving Pedro Morales free kick and Kendall Waston converted a Cristian Bolanos corner kick. But that defense. Ugh.

17. CHICAGO (0-1-0). Credit to the Fire for battling back again and again, but defensive chaos in a home opener does not inspire confidence. David Accam set up a goal for fellow DP Kennedy Igboananike with a steal and pass, and scored himself from the penalty spot in the MLS coaching debut of Veljko Paunovic viewed by 17,768 fans at Toyota Park. Arturo Alvarez, signed last week after an impressive preseason showing, lofted a great chip that Razvan Cocis put away. The new centerback pairing of Joao Meira and Johan Kappelhof needs work.

18. D.C. UNITED (0-1-0). Ouch. Whatever looked good in the CCL series against Queretaro vanished at StubHubCenter, especially considering Lamar Neagle began his United tenure in MLS by scoring in the fifth minute. Three other debutants -- Marcelo, Patrick Nyarko and Luciano Acosta – did well enough going forward but a total second-half collapse overrode everything else. Andrew Dykstra didn’t help his case to replace Bill Hamid by giving away a penalty kick.

19. COLORADO (0-1-0). Shocked by Wondo’s goal just seconds into the second half, the Rapids then bombarded the San Jose goal with 13 shots but were unable to get one into the net. Dillon Powers played a strong game as the attacking catalyst but DP Shkelzen Gashi -- who may be more adept up top -- showed little on the right flank before he was replaced by Luis Solignac midway through the second half. In his team debut, goalie Zac MacMath snuffed a couple of real threats.

20. PHILADELPHIA (0-1-0). MacMath’s successor in the Union nets, Andre Blake, couldn’t be blamed for the goals FCD scored after it shredded his back line. In just his eighth MLS appearance, he logged eight saves. Philly played one of the league’s best teams evenly (50.9 percent possession) on the road and generated 12 shots but only two were on goal.