Maybe we're asking ARs to do the impossible

We are still waiting for a look at the new -- rewritten, and greatly condensed -- rule book. The IFAB has been making a big deal of this. I’m not about to belittle it, it is a big deal, involving a lot of work.

And yes, of course, I have a complaint. Well, several actually. For starters it is decidedly irritating that we are being offered only a series of sneak previews. The book itself will not be available until May, when the IFAB will post it on its new website, theifab.com. Why the delay?

We’ve been told -- by former English referee David Elleray, who was in charge of the revision -- that the rewrite is intended to make the rules more accessible for everyone, referees, players, coaches, fans, journalists. Thoroughly commendable.

We have been permitted just one glimpse into the new book. This is the “triple punishment” rule change. Unfortunately, it is a shockingly bad change, a retrograde step, ill thought-out, that will simply permit defenders and goalkeepers to get away with more fouls.

If there is one thing that the game can do without, it is an expansion of the habit of turning a blind eye to goalkeeper fouls. I have raised before the threat that violent and reckless keepers pose for other players -- and I have no doubt at all that they will have to be reined in. Whether the sport itself -- the IFAB presumably -- does the reining in, or whether it is forced by the threat of legal action is immaterial. It is going to happen.

There is another area in which goalkeepers are regularly allowed to break the rules. During penalty kicks and shootouts. The rules are absolutely clear: the goalkeeper “must remain on his goal line ... until the ball has been kicked.” Sideways movement along the line is OK, but not forward movement.

But goalkeepers almost always do step forward. And it has become the accepted practice to allow them one step forward -- simply because it’s impossible to tell exactly when that step is made -- at the moment the ball is kicked, or a fraction of a second before.

All of that seems reasonable enough. It is also understandable that goalkeepers, knowing they’re always going to be given the benefit of the doubt, will try for two steps forward. Which must encourage keepers to go for more. 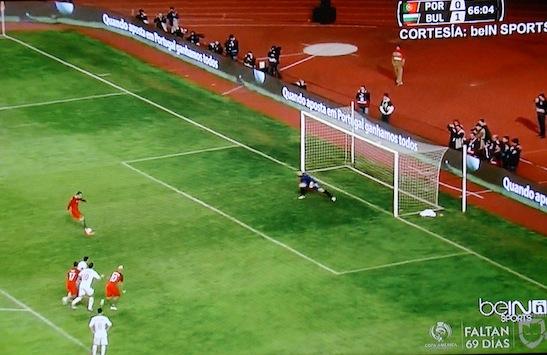 In the picture you can see Portugal’s Cristiano Ronaldo at the moment of kicking the ball for a penalty kick against Bulgaria in a recent friendly. The Bulgarian keeper is already, and obviously, way off his line (he is actually moving forward, too). He is not penalized. He makes the save. He becomes his team’s hero as Bulgaria wins the game 1-0.

A cheating hero, though. The kick should have been retaken. How on earth can the AR not have seen the illegal movement? Impossible. He must have seen it. Which can only mean the AR judged that the movement was legal, i.e. after the kick.

The rulebook is not helpful (the current rulebook, that is, I cannot tell you what the revised version says). Where the rule itself states that the keeper “must remain on his line,” the Interpretations section says the AR only alerts the referee when he sees blatant forward movement. Another concession to the keeper. (And yet another one: the picture also shows clear encroachment by both teams. For that, the kick should have been retaken, but again the keeper got a break because the violation was not called).

But I think the biggest problem here may be a physiological one. That the rules are asking the AR to do something that the human eye and the human brain simply cannot manage. The AR is being asked to have his eyes sharply focused on the goalkeeper, 22 yards away and, at the same moment, to have them acutely aware of what the kicker -- off to the AR’s left -- is up to. A separation of 12 yards, which may simply be too great for the human eye’s lateral vision to encompass with uniform intensity.

At least, such an explanation would account for the repeated occasions on which ARs seem to be blind to obviously illegal goalkeeper movement.

It needs thinking about. Maybe the problem can be solved by shifting the AR’s position. Having him stand behind the kicker, so that he can see both kicker and goalkeeper in the same frame seems the only workable position. The other answer, a much better one, is to use TV replays that can be viewed instantly and will clearly show if there is any cheating.

I wonder if the IFAB has ever pondered this matter? I doubt it. It’s not the sort of research that the IFAB does -- though it surely should.