Landon Donovan: 'A 10-year-old doesn't need to be heading a soccer ball'

Landon Donovan, the greatest player the USA has ever produced, recently appeared on "The Dan Patrick Show" and was asked about heading in youth soccer.

Beginning this year, U.S. Soccer has eliminated heading for children 10 and under, and put limits on the amount of heading in practice for children ages of 11 to 13.

“I think until you’re a certain age there’s no real need for [heading],” said Donovan. “A 10-year-old doesn’t need to be heading a soccer ball. It’s not like they’re gaining much in the game by doing that.

For example, AYSO: “The new rule bans heading for all U-11 and below division players. If an AYSO program doesn’t have single age divisions, heading is banned for U-12 and below. Heading for players in U-14 and U-14 will be limited to a maximum of thirty (30) minutes per week with no more than 15-20 headers, per player. There is no restriction on heading in matches in U-13 and above.”

• U.S. Youth Soccer's: Introducing the Skill of Heading in the 11-U Age Group 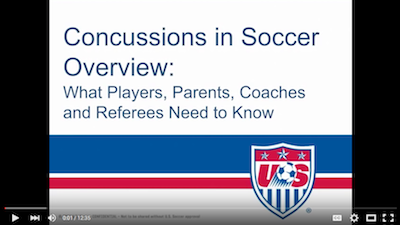 Coach Michelle French  has named a 26-player roster for the World Cup-bound U.S. U-20 women's national team's April 1-8 training camp in Lakewood Ranch, Fla. All but four of the players coming into camp are collegians.

The San Francisco Examiner reports that the city's Recreation and Parks Department has sent a letter sent to San Francisco Youth Soccer league supporters threatening to bring in an outside expert to mediate the conflict between soccer clubs if the league cannot "resolve its internal dispute quickly and fairly on its own." According to Rec and Parks, the number of kids playing soccer in San Francisco has doubled since 2009. The addition of an estimated 5,000 youth soccer players and 300 teams in nearly seven years has led to steep competition over premier practice times, field allocations and prized slots to play against teams outside San Francisco. The heightened competition has led to allegations of favoritism, reports Michael Barba. "Youth soccer boom in San Francisco leads to turmoil"