Is there any fair way to judge Ronaldo's time at Madrid?

Prior to Cristiano Ronaldo's arrival at Real Madrid in 2009 the club hadn't won fewer than two La Liga titles in any seven-year stretch since just after World War II. Real Madrid has won only one Spanish title since 2008, and this year will make eight seasons involving just one league title, seven of which included Ronaldo.

Making things worse, Atletico Madrid has won just as many La Liga titles as its Madrid rival during Ronaldo's stay (Atleti’s first since 1996), a period which also coincided with the most successful stretch in Barcelona history. Barca is well on its way to six Spanish titles in eight seasons for the first time in club history, five will have been won during Cristiano's seven years at Madrid.

This week it was reported that not only is the 31-year-old Portuguese star’s luxurious Spanish villa in Madrid been put up for sale, so has his mother’s, leaving tongues wagging regarding his transfer situation. (Real and Atletico are both appealing transfer bans, so it’s unclear if either will be able to make transfers this summer.)

This was about the juiciest news leading up to Saturday’s game at Barcelona, which is among the least anticipated editions of El Clasico since Ronaldo’s arrival (with Barca leading Real by 10 points, and Atleti by 9 points, with eight games remaining).

Although you can be sure that Cristiano Ronaldo will be looking to do the impossible on Saturday -- proving he’s better at soccer than Leo Messi in 90 minutes or less.

The jealous child. Barcelona has also won two Champions League titles since Ronaldo arrived at Madrid, but he was able to help Madrid lift La Decima, winning a 10th European Cup in 2014 that had eluded the club for 12 years.

Cristiano's signature accomplishment at Madrid was capped off with pure Ronaldo.

In the Champions League final against rival Atletico, Sergio Ramos tied the game in stoppage time, Gareth Bale scored the winning goal, and Angel di Maria was named Man of the Match by UEFA (with Ramos named MOTM by the fans), but it was Ronaldo’s shirtless flexing after his cosmetic penalty, making it 4-1 in the 120th minute, that guaranteed his own image would be splashed across the world. 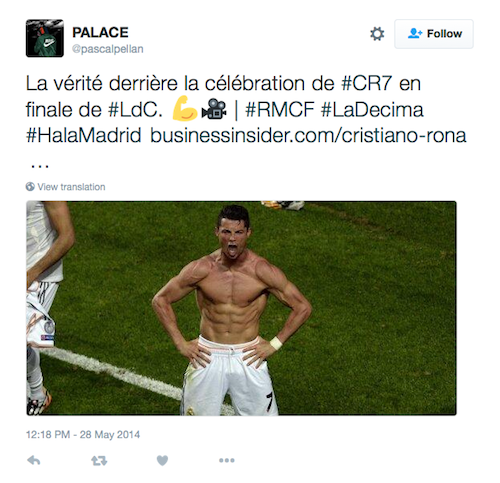 As even during what should be the high point of his professional career, Ronaldo is left calculating how to draw the camera back to him, something he likely felt was assured once joining Madrid -- but if Ronaldo seems even more childlike than when he arrived, perhaps his juvenile antics have escalated while watching the world lavish attention on the kid in the sandbox right next door, as Leo isn't just objectively far better at building sand castles, he's constantly surrounded by better tools.

Objectively, it would be hard to say that the supporting cast around Ronaldo has ever been better than that of Messi, and this disparity has even been more glaring with Messi now forming an attacking trio with Luis Suarez and Neymar.

Andres Iniesta, Xavi and Neymar combined for six top three Ballon d’Or finishes since Ronaldo arrived at Madrid, but no Madrid player besides Cristiano has finished top three since 2006 (when Fabio Cannavaro and current Madrid coach Zinedine Zidane were first and second).

This has been a disastrous season for Madrid –- 10 points adrift of Barca and eliminated from the Copa del Rey for using an ineligible player --- but the Champions League does offer one final reprieve. Madrid will be heavily favored to knock out VfL Wolfsburg and reach the semifinals, and any season that ended with denying Barcelona a treble while winning another European Cup would immediately go from failure to success.

Cristiano Ronaldo vs. Michael Jordan. With history unlikely to change its opinion on the winner of Ronaldo vs. Messi, providing some context about how hard it is just to be second best at soccer may help Ronaldo, a man who, by all accounts, has been generous with his time and funds off the field.

Ronaldo doesn’t make it easy to sympathize, but for those with an open mind, and objective reasoning, it would be difficult to make an overwhelming case that Michael Jordan was significantly better at playing basketball than Ronaldo is at playing soccer (without including things like leadership, and what it means to be a great teammate).

To become the second best soccer player in the world, Ronaldo has been forced to outperform all but one of a talent pool that is infinitely larger than basketball’s has ever been, especially in the 80’s and 90’s, when Jordan played. Not only was the NBA almost exclusively U.S. players at that time -- a country with multiple team sports competing for athletes -- the average NBA player is 6-foot-7 and 225 pounds.

Soccer is played in every country on earth, the primary sport in most, and the first choice for most athletes, a sport with almost no barriers to entry regarding size.

In fact, if you look at the greatest players in soccer history their average height is remarkably close to the average height of an average man born on planet earth (about 5-foot-9), making it clear that not only has Ronaldo scaled to the tip of an iceberg that is far, far larger than that which Jordan ruled.

Messi is considered by most to be the greatest athlete on earth, but at 5-foot-7, it was preordained that the world’s greatest athlete would never be a good enough ‘athlete’ to play basketball, regardless of his skill level, and neither were Pele, at 5-8, or Diego Maradona, at 5-5. (There are 450 current NBA players; only two are shorter than 6-foot.)

Ronaldo’s soccer career coincides with perhaps the greatest player that has ever lived, and regardless of whether you think that being a clear second among an ocean of competition is more impressive than Jordan, who is 6-foot-6, reigning supreme over Lake Michigan, the global scale of his accomplishment is undeniable (granted, it would be a lot easier to appreciate Ronaldo’s magnificence if he weren’t such a preening knucklehead).

So, has Ronaldo's time in Madrid been a success? It seems like a simple question but it becomes more complicated when you try to account for how the odds have been stacked against him by playing in a league with Lionel Messi and Barcelona (a situation Ronaldo chose).

When you wonder about the road not traveled, and accolades he would've earned had he stayed in the Premier League (Ronaldo arrived after having won three straight EPL titles at Manchester United, which was runner-up to Barcelona in the 2009 Champions League final).

If it might’ve changed the way we think about Ronaldo, or Messi, if their comparisons were abstract, facing each other only a few times in the Champions League, with each meeting carrying enormous weight, as opposed to playing multiple times a year.

But with Ronaldo in Spain, and the pecking order of their greatness coming with the convenient apples to apples comparison of team success, there is no room for subjectivity; the fact Ronaldo won two Ballon d’Ors during his time in Madrid is amazing, but he is now second best by some distance.

The answer throughout the club’s history, regarding success, for any superstar in that had allowed Barcelona to win five titles to Madrid’s one (with the other falling equally unforgivably to Atletico), during seven years in Spain's capital, would be an unequivocal no, even if no superstars in Madrid’s history ever faced the competition Cristiano has.

Perhaps Ronnie’s charmed life took a turn for the worse in 2007, when Kaka was the last man other than Ronaldo or Messi to win the Ballon d’Or. Cristiano may have sized up this mop-topped kid from Argentina and decided he could never pose a direct threat to Ronaldo's global takeover.

Looks like a greasy teen squad photo in liquid not the ballon d'or 2007 pic.twitter.com/ndcKWe7LEM

cristiano ronaldo, international, real madrid
1 comment about "Is there any fair way to judge Ronaldo's time at Madrid?".
Next story loading