The U.S. women's national team took their dispute with U.S. Soccer to a new level as five players -- Hope Solo, Carli Lloyd, Megan Rapinoe, Becky Sauerbrunn and Alex Morgan -- filed an action with the Equal Employment Opportunity Commission, charging the federation with wage discrimination by paying them far less than the men.

It set off a p.r. battle in which the federation will be no match for the five women -- but what about the legal issues? Do they matter? In the big picture, it's all about reaching a new collective bargaining agreement. The only issues are how much more the women will make and how long will it take for the parties to settle. 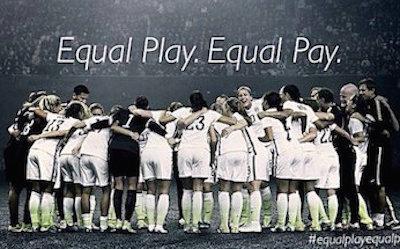 The women shared just $2 million for winning the 2015 Women's World Cup while the men made $9 million for only making the round of 16 at the 2014 Women's World Cup. In addition, they say on-going win bonuses and per diems they receive are less than those the men receive. (In the EEOC filing, they said they'd earn $99,000 each if they won 20 friendlies while they men would get $100,000 even if they lost all 20 games.)

“The numbers speak for themselves,” Solo said in a statement. “We are the best in the world, have three World Cup Championships, four Olympic Championships, and the USMNT get paid more just to show up than we get paid to win major championships.”

The players are represented Jeffrey Kessler, the New York-based attorney who is no stranger to soccer disputes. The longtime labor and anti-establishment attorney, perhaps best known for his suit against the NCAA, represented the old NASL against the NFL, the MLS Players Association against MLS and the Women's National team Players Association against U.S. Soccer about the validity of their collective bargaining agreement. (Kessler also represents the current NASL, unhappy with proposed changes to U.S. Soccer's Division I sanctioning.)

"This is one of the strongest cases of gender discrimination I have ever seen," he told USA TODAY Sports. "We have a situation here where the women's have outperformed the men on the field and in every other way yet earn fraction of what the men are paid."

Kessler added that the complaint was a "pretty open and shut case." Whether that is true is for the attorneys to argue, but it is certainly a complicated case.

The pool of bonus money from which U.S. Soccer pays the women are paid for playing in the World Cup is much smaller than it pays the men because of the money it receives from FIFA is much smaller.

The women point to record television ratings for their games during 2015 Women's World Cup, though Fox Sports pays FIFA, not U.S. Soccer, for the rights. (U.S. Soccer also counters that ratings for men's games whose media rights they control are much higher than for women's games.)

Should the size of bonuses matter for anything other than performance? Should past performance and current expectations have any effect on bonus triggers?

The women are honing in on the revenues U.S. Soccer generates from men's and women's activities. In their filing, they claim they generated $20 million more revenue in 2015 than the U.S. men's team but were paid almost four times less. (The federation's position: revenues from men's games are nearly twice as those from women's games if you look at them, not over one year, but four- and eight-year cycles.)

Four players -- all but Rapinoe, who is rehabbed a knee injury -- went on NBC's Today Show Thursday morning to make their case.

"I think the timing is right," Lloyd told Matt Lauer. "I think we've proven our worth over the years. Just coming off a World Cup win, the pay disparity between the men and women is just too large. We want to continue to fight. The generation of players before us fought. And now it's our job to keep on fighting."

The players' rallying cry -- "Equal Play. Equal Pay" -- is something everyone can understand. It even drew support from Landon Donovan and Tim Howard, and presidential candidate Hillary Clinton.

Wouldn’t want to face these women on the field or in the courtroom. Every woman deserves equal pay. https://t.co/RBuAFtgpDS

In a statement, U.S. Soccer said it has been "a world leader in promoting the women's game and are proud of the long-standing commitment we have made to building women's soccer in the United States and furthering opportunities in soccer for young women and girls around the world. This includes leading the successful campaign to introduce women's soccer in the Olympics in 1996, the inclusion of prize money for the Women's World Cup, and the establishment and support of the National Women's Soccer League, which is now in its fourth year of play."

In a conference call with reporters, U.S. Soccer president Sunil Gulati, a Columbia University economics professor, said a lot of factors go into determining the compensation U.S. Soccer wants to pay its players.

U.S. Soccer and the women are now involved in two legal cases -- the suit in Federal court over the validity of the collective bargaining agreement and the EEOC complaint. A decision on the CBA should be known by late spring. The EEOC complaint could, if the parties jump through every hoop, drag on for years.

In the meantime, a new collective bargaining agreement will have to be reached, if not before the Rio Olympics -- as the women would like to gain maximum leverage -- but by early 2017. To wait longer would not necessarily adversely affect the national team -- its next official matches wouldn't be until 2018 -- but could spell doom for the NWSL.

Settling the EEOC complaint is another card the women have to play at the negotiating table.