Abby Wambach: 'This is all on me'

Retired women's superstar Abby Wambach quickly apologized after she was arrested early Sunday on a DUI charge in her hometown of Portland, Oregon. She failed a a field sobriety test and later a breath test at Portland's Central Precinct after being pulled over for failing to stop for a red light. She said she was leaving a dinner at a friend's house when she was stopped.

Wambach was booked early Sunday morning and released on her own recognizance after she was charged with the misdemeanor of DUII (driving under the influence of intoxicants). 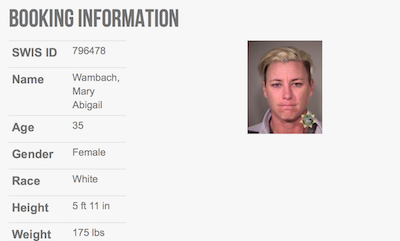 The Portland Police Bureau told AP Wambach was "polite and cooperative throughout the investigation."

In her Facebook post, Wambach wrote, "Those that know me, know that I have always demanded excellence from myself. I have let myself and others down. I take full responsibility for my actions. This is all on me. I promise that I will do whatever it takes to ensure that my horrible mistake is never repeated. I am so sorry to my family, friends, fans and those that look to follow a better example."

The all-time leading international scorer retired in December after a 15-year career during which she won one world championship (2015) and two Olympic gold medals (2004 and 2012).

REACTION. MINI USA said Sunday night that it was withdrawing ads in which Wambach appeared. "This behavior is against the values we promote as an organization, and the safety of everyone on the road is a priority here at MINI," the company said in a statement. "Because of this, we are re-evaluating her association with the brand and are pulling content that individually features Abby from our marketing. We will continue to assess the situation and weigh our options."

Last night I was arrested for DUII in Portland after dinner at a friend's house. Those that know me, know that I have...

In Portland, Wambach's arrest was a major story as it followed an increase in traffic enforcement following a string of fatal car crashes. In nearby Gresham, a 10-year-old boy was killed on Tuesday, and two days later an off-duty firefighter died in separate pedestrian accidents.

abby wambach, jurisprudence
8 comments about "Abby Wambach: 'This is all on me'".
Read more comments >
Next story loading