The recent tragic, disastrous and possibly hilarious screw up by Man City that allowed Zlatan Ibrahimovic to score a totally unexpected goal for PSG is worth scrutiny.

The unexpected part can be immediately verified when you understand that the TV director missed the goal -- he was busy showing a replay of Kevin de Bruyne’s goal, scored just three minutes earlier to give Man City a 1-0 lead. Then suddenly, whoosh (and whoops!), we’re at the other end of the field where Ibrahimovic is to be seen walking away from the Man City goal, ball in hand. After a short pause, the announcer informs us “Well, it’s 1-1.”

The replays tell the story. A short on-the-ground, goal kick from Joe Hart, horrendously miscontrolled by Fernando, has allowed Ibrahimovic to pounce and redirect Fernando’s intended pass into the goal.

No excuse then, for Fernando. But does Hart share the blame? After the game, Alexi Lalas asked the question, “Should Hart have even played the ball to Fernando?” -- implying that Hart should have opted for the more traditional long goal kick. Lalas immediately answered his own question with a resounding “Absolutely you play it . . . I know it resulted in the goal here, but what if you don’t do that? You just kick it long?” With the talent they have on the field, said Lalas, Man City should be able to play the ball out of the back.

Immediately, Lalas’s fellow TV studio panelists -- Warren Barton and Brad Friedel -- were cutting in, overtalking each other in 90 seconds of lively, entertaining television. Not everything Friedel said got through the shouting. But we know what his point would be -- Friedel being a paid-up member of the goalkeeping brotherhood would not be criticizing Hart, for sure. His plea -- “You can’t blame Joe Hart for that” came through clearly. Twice.

Barton, however, won the shouting match, and he clearly did hold Hart responsible for the mess. Hart should have kicked the ball long. Barton’s reasoning was: “You’ve just scored a goal, you’re away from home, you’re four minutes until halftime -- so ‘Get up boys, squeeze to the halfway line, I’m gonna launch it.’”

That’s the realpolitik view. It is a strong argument -- all the stronger in this case, as we know the alternative turned out to be a calamity. It is a view that says the hell with trying to play soccer, just hoof the ball away -- in fact, Barton told us that in moments like this -- “You can’t play this beautiful, attractive football ...” That might also be considered realpolitik but it is more likely standard English primitivism.

My sympathies are more with Lalas and Friedel, who maintained that Hart was right to try to play from the back, but that Fernando messed things up by not controlling a simple pass.

But that was not the whole story. Blame for the screw-up should be equally shared by Hart and Fernando. When Hart prepared to take the goal kick, he was, of course under absolutely no pressure at all. He had the time to survey what was going on in front of him. He opted for a short kick -- and had three possible targets. To his right, at the corner of the penalty area was Nicolas Otamendi. Some 13 yards behind him was PSG’s Edinson Cavani. Over at the left-hand corner of the penalty area was Eliaquim Mangala, with Ibrahimovic about 12 yards away. More central was Fernando. Of those three, the riskiest choice was Fernando. Simply because a ball to him was a ball played into a dangerous area, directly in front of goal, plus the ominous fact that Ibrahimovic was lurking only eight yards behind him. 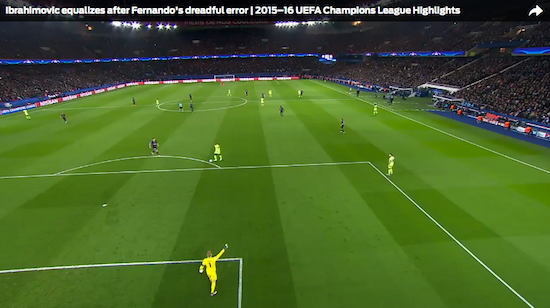 Yet Hart ignored the safest -- indeed, the best -- option (to Mangala) and played the ball to Fernando. Before the ball even reached Fernando (it had only 12 yards to roll), Hart, evidently now aware of impending trouble from Ibrahimovic, had raised his right arm, pointing at Otamendi -- evidently urging Fernando to play the ball first time to Otamendi.

Fernando had other ideas. But in trying to flick the ball towards Mangala, he played it directly on to Ibrahimovic’s foot, from which it sailed into the unguarded net. The fact that the goal was wide open is another criticism of Hart, who should surely have moved more quickly to his left to protect the open goal.

Even so, Fernando’s blunder seems the biggest of the errors. Not only in the limited context of this one game, but in the wider sense that it will please those who don’t believe in trying to play “this beautiful, attractive football.”