Should Brazil fear Germany at the Olympic Games?

This summer’s Olympic men's soccer tournament holds extreme importance for host Brazil for a couple of reasons. The Olympics are the only world championship on the men's side that Brazil has never won. And it has a chance to exorcise the embarrassment from the World Cup it hosted in 2014 at which it was thumped, 7-1, by Germany in the semifinals.

The draw for the 2016 Olympic soccer tournament took place last week and revealed that if Brazil and Germany won their groups and prevailed in the quarterfinals, the two nations would meet in the semifinals. 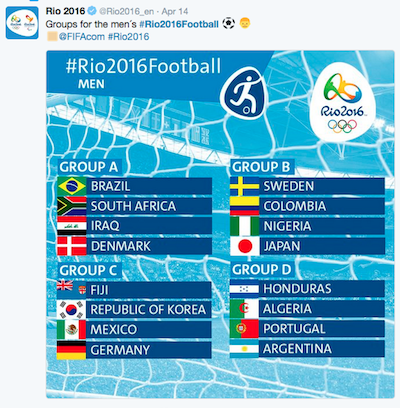 Brazil has won five World Cups, five U-20 World Cups, three U-17 World Cups and five Futsal World Cups. It was won three silver and two bronze medals at the Olympics. At the 2012 Games in London, Brazil, with a team that included Neymar, Thiago Silva and Oscar, fell, 2-1, in the final to Mexico.

Germany, which earned its fourth World Cup title with a 1-0 win over Argentina in the 2014 final at Maracana, hasn’t reached the men’s Olympic tournament since 1988, when it was West Germany and won the bronze medal with a team that included a 24-year-old Jurgen Klinsmann, who scored four goals.

That 1988 Olympic tournament was the last before it became a U-23 tournament, a format that in 1996 added the feature of each team being allowed three “wild card” overage players.

European teams qualify for the Olympics via the U-21 European Championship, a competition Germany has not fared well at, aside from winning in 2009, when the competition wasn’t part of the Olympic cycle.

At last year’s U-21 Euros, with four spots in Rio at stake, Germany clinched an Olympic berth by reaching the semifinals, where it lost, 5-0, to Portugal. Also qualifying from Europe were Sweden, which beat Portugal on penalty kicks after a scoreless tie in the final, and Denmark.

Germany’s run in qualifying, in which it squeaked through with ties against the Czech Republic and Serbia, didn’t impress enough to make it an Olympic favorite nor is it expected field major stars as wild-card players. The European Championship ends three weeks before the Olympics kick off and no one, especially their clubs, expects players to take part in both tournaments.

In fact, Germany might not even get his top U-23 players released for Rio because the Bundesliga kicks off six days after the Olympic final.

Germany coach Horst Hrubesch put to rest prospects of adding 2014 World Cup captain Philipp Lahm and defender Per Mertesacker, who retired from the national team after the win, indicating he’s likely to give the spots to key players from his 2015 U-21 team from qualifying who were born before the Jan. 1, 1993 cutoff date, such as -- Kevin Volland, Yunus Malli and Marc-Andre ter Stegen.

For its part, Brazil will use Neymar as a wild-card at the Olympics instead having him play in the USA-hosted Centenario as Barcelona will release him for only one tournament.

Mexico, which won the U-23 Concacaf championship to qualify from the region along with Honduras while the USA failed again, is more likely than most participants to add full national team stars to its Olympic team because Mexican clubs are more apt cooperate than European clubs.

One of Mexico’s top U-23 players, the 20-year-old Pachuca attacker Hirving “Chucky” Lozano, has already been starring for the full national team and has said he wants to play in both the Olympics and the Centenario.

A rematch with Mexico, the team that denied Brazil gold four years ago, looks a more likely fate for Brazil than a chance to avenge the Germany loss of 2014.