Christian Pulisic: Whirlwind 2016 for the prodigy from Pennsylvania

Christian Pulisic's rapid ascent at one of the best clubs in the entire world has U.S. fans, and those at Borussia Dortmund, rightfully excited about the bright future of this 17-year-old American who just became the youngest player ever to score a goal in the Bundesliga who wasn't born in Germany.

Pulisic played his final game of 2015 on Dec. 20 in an U-19 game for Dortmund at Holsten Kiel, whose senior club has never played in the Bundesliga. Pulisic started that game where he often has for BVB's junior teams, and for U.S. junior national teams, in attacking midfield, snagging a goal and an assist in the 4-0 win.

Pulisic’s last competitive game as an amateur was played in front of 800 people.

One of Pulisic's best friends at Dortmund, Felix Passlack, captain of Germany's U-17 World Cup squad, was also in the starting lineup that day for Dortmund’s U-19.

Passlack and Pulisic, the top-rated players in Dortmund's highly regarded youth system, would soon be whisked to Dubai over Germany's extended winter break, promoted to train with Dortmund's senior team for the rest of the season (both have appeared for the U-19s since, to keep sharp).

Sunday’s 3-0 win over Hamburg was the first time both were on the field together for Dortmund’s senior team, and Passlack, making his third appearance, was the first player to congratulate his American buddy after Pulisic's debut goal.

"[Christian and I] have known each other for a year and a half in the youth teams. It's great fun to play with him, he gives you confidence and he almost always come out on top in one-on-ones," Passlack said. "I think we will catch little sleep this night. But we'll be back in training tomorrow."

Just after Pulisic's Dortmund debut I explained why both his skill-set and his personality type were well suited to new Dortmund coach Thomas Tuchel's personality and the style of play he brought to BVB, offering several reasons why Pulisic was poised for more playing time at Dortmund.

A rapid rise in the Ruhr. Like many players his age, much of Pulisic’s opportunities came due to circumstances outside his prodigious talent. Dortmund has been shorthanded for attackers in the second half of the season; Bayern Munich’s dominance eliminated any title race, offering Bundesliga opportunities. (Dortmund's 71 points after 30 games would've seen die Schwarzgelben first during 47 of the 52 previous Bundesliga seasons). Teammates Matthias Ginter, Roman Burki and Marcel Schmelzer offered their congratulations and insights after Sunday's game.

That said, Pulisic has impressed at nearly every opportunity, leaving fans in Germany (nearly) as excited as those in the U.S. about this well-grounded young man (raised by a mom and dad who were both soccer players at George Mason University.)

Pulisic has now played 332 minutes in 10 appearances, seven in the Bundesliga and three in the Europa League, and BVB has not been outscored with Pulisic on the field in any of his 10 appearances.

His 22-minute debut came on Jan 30, his second appearance was his first away game, his fourth a brief stint against Porto in the Europa League, his first start came in his fifth appearance, at Bayer Leverkusen. In his seventh appearance, Pulisic played 30 minutes at White Hart Lane in a win over Tottenham.

On March 29, Pulisic debuted for the U.S. senior national team in a 4-0 win over Guatemala, in Columbus. Days later he won a late corner as a sub that resulted in the winning goal during a 3-2 comeback win in Dortmund, where BVB has not lost all season.

Tuchel’s biggest show of confidence in Pulisic was not his three Bundesliga starts, as Juergen Klopp's return to Dormund with Liverpool wasn't just BVB’s biggest game of the season, it may have been the most anticipated game in Europa League history. Tuchel showed his faith, bringing the teenager on for superstar Pierre-Emerick Aubameyang with 14 minutes left in a tie game.

Last week, Pulisic started at Schalke 04 in Germany's biggest rivalry, the Ruhr derby, and after Dortmund's three-goal collapse at Liverpool last Thursday -- Dortmund’s only loss in 20 games during 2016 -- Sunday’s emphatic rebound was crucial.

Pulisic answered the bell in his third start, playing 90 minutes for the first time, and scoring his first goal in his first ever start at the Westfalenstadion.

Dortmund only has four more Bundesliga games; although Pulisic is now more likely to play in Wednesday’s DFB Pokal semifinal, with Aubameyang now out with a toe injury.

Pulisic is now the youngest player born outside Germany ever to score in the Bundesliga, putting Pulisic in good company.

Nuri Sahin was named German Player of the Year as a member of BVB's 2011 Bundesliga title team, now 22, Julian Draxler played for Germany at World Cup 2014, and Timo Werner, still just 20, has been a regular for VfB Stuttgart since his opening goal in 2013. (Lars Ricken made over 300 appearances for BVB, winning three Bundesliga titles, scoring in the 1997 Champions League final win over Juventus, and was in Germany's 2002 World Cup runner-up squad.)

4 -Only 3 players were younger than #Pulisic (17 years, 212 days) when they scored their first BL goal. @BVB #BVBHSV pic.twitter.com/d8lH04rZRG

Tip of the iceberg. This is the part where I’m obligated to bring up all the soccer starlets that have flamed out, and how Pulisic’s 332 minutes with Dortmund don’t even total four full games, but American fans are thirsty for a star who looks the part -- so I’m not going to mention that.

Pulisic offers a rare blend of talent, speed and excitement, the likes U.S. fans haven’t seen in the same package since Landon Donovan (and in case you’re wondering if Landon’s paying attention, he pointed out on Twitter that Pulisic already has more Bundesliga goals than he and Taylor Twellman combined).

You can see all of his touches, but my favorite play in Sunday’s win came a few minutes after his goal. Brimming with confidence, Christian muscled a defender off the ball, before showing his elite burst in the open field. (Thanks to @guba1a, who grabbed this clip for SA readers.)

While that final delivery was less than perfect, passing is not a problem for Pulisic, who spent much of his development in attacking midfield. He’s stayed outside at Dortmund, avoiding physicality as he matures physically, and keeping decision-making simpler.

One would imagine Tuchel, a coach known for developing young talent, would eventually give the American opportunities in central areas. Tuchel and Dortmund clearly had a plan for his development, allowing Pulisic to get comfortable on the left wing before giving him a couple games on the right flank. On Sunday, Tuchel gave the youngster more responsibility, which led to his first goal.

With both primary corner takers resting, Marco Reus and Henrikh Mkhiratyan, Pulisic took every corner kick for BVB until the final minutes, sending two into the box -- the first solid, the second was excellent -- and after that he played every corner short, which is how his first goal developed.

Pulisic’s first professional goal included a great first touch and expert finish at one of the world's best stadiums. Not only was it the winner, it came against a former European champion -- Hamburg won the European Cup in 1983 -- and the American teen was expertly assisted by Mats Hummels, Dortmund's captain and a World Cup champion.

"It was super, well played by Mats," Pulisic said (in German).

Not bad for a kid that should be making Pennsylvania prom plans (in English).

Tuchel after the game (in English): "For Christian, it's a very, very important goal. We see his techniques and his ability to adapt on this level everyday in training, and that's why we trust him. We're very happy that he can show it in our stadium."

The league has been more than happy to hype the rising star from across the Atlantic, who was named to the team of the week, with the Bundesliga's English website running five different articles on Pulisic since Sunday’s goal. A couple remarks after the game:

Q: "Do people in the U.S. know how much of a rising star you are at one of the biggest clubs in football?"

Pulisic: "In the U.S.? Yeah, I know a lot of people follow me and I think I have a bit of support there which is good. It’s just awesome to be a part of that."

Q: "What kind of celebration was it? You waved your hands to the left and right."

Pulisic: "Yeah it’s called dabbing. It’s just a little celebration that I have from my American roots." 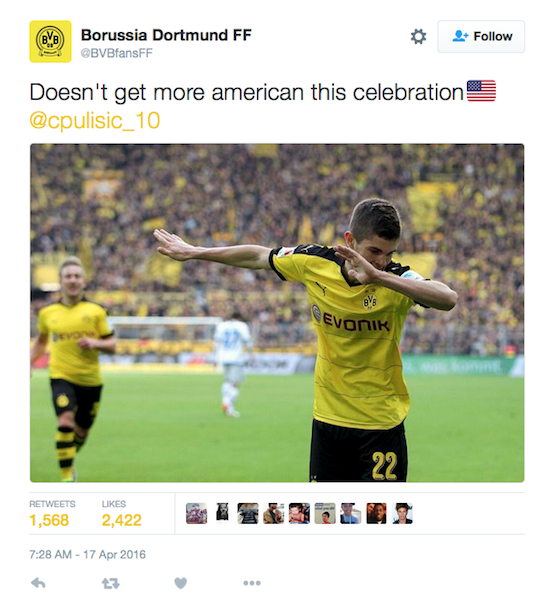