Soccer, from the Heart

A small book, the classic “slim volume” if you like ... but Brian Glanville’s “The Man Behind the Goal” weighs in as a massively important contribution to any telling of the phenomenon that is soccer.

Unique, too. I know of no other works of soccer fiction (already, just linking those two words, you realize how rare these 14 stories are) to compare. 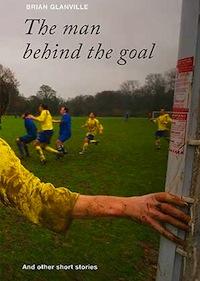 And to think that Glanville captures so much about the heart of the sport by writing about a short period of English soccer, in the 1960s and the early 1970s. A pregnant moment, for sure -- the English game, and hence the world game, was about to move from being a largely working class diversion into a cut-throat world of high finance. Things were about to become serious.

Which meant a wrenching change. The solidarity of a widely shared, deep-seated, communal and cultural warmth was slipping away. Into its place came the impersonal and synthetic brashness of celebrity entertainment.

That change, and its implications -- which Glanville saw more clearly than most (it was Glanville who a little later hailed the newly formed Premier League as the “greed-is-good” league) -- haunt most of these stories.

Not in any gloomy way, though -- Glanville has plenty of humor to offer as he picks his way through the anecdotes, as his characters voice their dreams, complaints and opinions. And it is those characters who convey the flavor of this book and of a sport that was losing its soul.

By today’s feverish standards, most of the characters are small-timers, and most of them would be scornfully dismissed as losers. There are few moments of glorious triumph here, which brings the whole soccer scene into its more realistic, more human dimension.

The atmosphere that Glanville creates so beautifully is introduced, softly, suggestively, immediately in the title story, “The Man Behind the Goal.” We are told, in the first paragraph, that we are at “a little football field.” That is the scale. But there is a big soccer theme at work: the older man, evidently an ex-player, but we’re never quite sure about that, who is training a young boy to be a great player.

The boy is clearly never going to make it, but his tutor cannot see that ... and suddenly as you read, you see that so little has changed in the 50 or so years since this story was written. “I’ll make a footballer out of him,” says the man “I’ve got the perfect system, see. Whereby, if the material is young enough, any player can be turned into a champion.” The man has reduced it all to a number. It is, he says, all about tuition time: “To reach international standard, I have estimated it will take three hundred hours.”

An infallible system? A quick visit to the myriad booths of the NSCAA Convention lets you know that magic systems, dozens and dozens of them, are still very much alive. As for the man’s crude assessment of 300 hours, today we have immensely clever experts telling us, with the arrogant authority of scientific certainty, that the magic number is 10,000 hours.

The old man’s attempt to create a star player, slowly disintegrates, the story ends sadly in failure. Sadly, but not cruelly. Glanville has sympathy for these people, be they players or just plain fans, these small devotees of soccer. He understands their devotion. He never judges them.

And from their sometimes crazy, sometimes dishonest, sometimes exasperating, occasionally rewarding attachment to the sport come these inside tales. If the old tutor has thought about the game and invented a system, most of the others haven’t done much thinking, but they have a voice in Glanville’s stories, a convincing voice because Glanville’s ear for dialogue is so sharp. We hear, in their frustrated complaints, about changes in the way the sport is being played.

The new breed of coaches with impressive badges and coaches was arriving. Not necessarily welcomed -- “twats, little men that tried to bully you, that tried to stop you playing, that never, never let you enjoy yourself,” says one player, “... fuck the discipline, there was too much bloody discipline.” Another bitches that “There wasn’t no fun in football, though, clump and bang and marking all the time ...” A player is told: “They say you’re holding the ball too long.” From the director’s box comes a plaintive voice “You know our trouble? We play too much football.”

Change is in the air, sensed, felt, but not yet understood by the players. A new term is being used, one that is constantly with us today. “What’s all this bloody work rate?” asks an old-time coach, “Footballers aren’t factory hands.”

The changes are significant. With the new breed of coaches Tactics with a capital “T” settled on the sport. Reminded of the changes, an old-timer answers bitterly “Maybe, but it hasn’t changed for the bloody better.”

In those days the fans mostly stood in the stadiums -- on uncovered terraces, in cold and in rain -- but there was a warmth that rose up from those crude harsh terraces a human warmth that permeates Glanville’s stories. Now, the terraces are gone, replaced by seats, cheap turnstile entry has been banished by high-priced tickets, the grimy old stadiums have been demolished, we’re now in an era of shiny new arenas and flashy cars.

Some idea of what was coming is present in two of the stories, both set in Italy. Where life was not only sunnier, it had greater freedom. In England, pro soccer was just emerging from the restrictions of the “20-pounds-a-week” maximum wage. That was it. Even if you were Stanley Matthews -- the greatest star at the time -- you still only got 20 quid a week. In Italy real money could be earned.

Glanville has some fun describing the Italian scene, so much more colorful than what went on in England. “The Agents” tells the logical story of how a young English star is pursued by rich Italian clubs. The boy signs for one of them ... and then disappears. Soon, he turns up back in England, having been totally unable to adapt to the new freedom. His agent (another small-timer, quite unlike today’s slick version of the breed) speaks for him: “It was all very very strange to him ... the food ... everyone speaking Italian.”

There is so much in these tales that reveals the English sport, bewildered in an era of change. What makes the stories so intense, so compelling, is that Glanville has insight about the changes that are coming, but you know that he’s aware that something worthwhile is about to succumb to progress. He never tells you that, but he lets you sense it. His sympathies are with the players and coaches who will struggle to adapt, and the directors, all the old-timers, even the hangers-on, who are about to be swept aside.

Extraordinarily, in “All Rovers Fans” there is even some sympathy -- or at least a non-judgmental approach -- for the hooligans, the wretched group that seemed to act as the final, violent spasm of the old sport in its death throes.

Much of what Glanville is describing could, I suppose, be described as soccer trivia. But it is in the small things, the details, that the human dimension comes through. In that sense these stories are better not described as soccer fiction, but as short stories with soccer themes. Rather as Glanville’s two soccer novels, “The Rise of Jerry Logan” and “The Dying of the Light” are better thought of as simply damn good novels ... with soccer themes.

However you describe them, they are beautifully written. Coming, like Glanville, from southern England, I always felt there was something foreign about “up north” where so much of the professional game was played. That sense of somewhere different was present in the hard northern place names. In the south we didn’t have names like that -- Barrow, Rochdale, Tranmere, Accrington -- names, says Glanville, with consummate artistry, that “fell like dry ice on the heart.”

Some of the stories bustle quickly along, some are more leisurely, but the pacing is always just right and the authenticity too. The soccer influence is always there, integral not forced, not an exotic oddity.

Soccer life was changing. The stories vividly and boisterously tell us that. But they also reveal, more gently, more subtly, the truth of plus ca change, plus c’est la meme chose.

The Man Behind the Goal by Brian Glanville (WSC Books Limited)

england
5 comments about "Soccer, from the Heart".
Read more comments >
Next story loading