The U.S. U-17 boys national team hosted Canada for two friendlies in Fort Lauderdale and won each game, 3-1.

Ayo Akinola, who was born in Michigan and grew up in Ontario, Canada, scored twice in the second U.S. victory. Akinola moved to U.S. Soccer’s U-17 Residency program in Bradenton, Florida, after playing in Toronto FC’s youth academy. Last month he scored three goals -- including a strike in a 1-1 tie with Brazil – and had an assist in four games as the USA won the 44th International Montaigu Tournament in France.

“He’s a game-changer,” says Anthony Capotosto, who coached Akinola last season with Toronto FC’s U-15s and this season is coaching his younger brother, Tom. “He has the ability to influence a game at any point. He’s a prolific goalscorer. He really worked hard last year. I’ve got to take my hat off to him. He really put in the time and the effort. He was serious about taking his game to the next level.”

In 2015, Akinola was the U.S. U-15 national team’s second leading scorer with five goals, one less than Andrew Carleton of Georgia United. For Toronto FC, which doesn’t compete in the U.S. Development Academy, Akinola’s team played a year up in the Ontario Youth Soccer League.

“He would often ask to stay after training,” says Capotosto. “I would serve balls into him and he would take repetitions on goal for finishing. There were times when I would come downstairs and see him working out in the gym by himself. …

“He has a great ability of holding up the ball. I played him as a center forward, No. 9-type target player. He also has the ability to run behind the opposition’s backline. … And all different types of finishing. In and around the box. Striking from distance, with his head.”

In the first 3-1 win over Canada, George Acosta, who scored six goals during the Montaigu Tournament title win, scored the first and assisted on the second goal. Carleton, who last year helped Georgia United reach the U-16 U.S. Soccer Development Academy semifinals, scored in both games and assisted in the second on Akinola's first goal.

In April of 2015, Ayo Akinola scored four goals in a 6-2 win over Croatia during
the U.S. U-15s' title win at the Tournament Delle Nazioni: 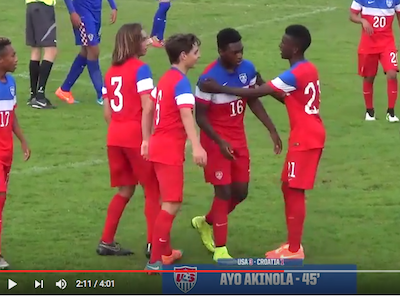 De Anza Force fields teams in the U.S. Soccer Development Academy (boys) and ECNL. Its alums include Marc Pelosi, who captained the USA at the 2011 U-17 World Cup and currently plays for the San Jose Earthquakes.

"We are thrilled that Albert will be joining our team,” said De Anza Force Director of Coaching Jeff Baicher. “We have a huge admiration of Barca style of soccer.  Albert shares our values and he places the same strong emphasis as we do on the player development."

Arsenal Soccer Schools USA is launching a year-round club for Mt. Olive, N.J., for boys and girls team from age levels U-6 (2011-born) to U-11 (2006s). Leroy Sequeira, Director of Arsenal Soccer Schools USA, says the ultimate goal is to field teams in the U.S. Soccer Development Academy. … FC Barcelona Schools (FCBEscola), which opened an academy in Miami in 2014, is launching another in Charlotte, North Carolina. … Florida’s Monteverde Academy finished No. 1 in the boys USA Today/NSCAA Super 25 Winter Boys final postseason national rankings. Santa Margarita (Rancho Santa Margarita, Calif.) No. 1 in the Girls Final Winter Rankings. … A Georgia woman was arrested for allegedly stealing $56,000 from the Barrow Youth Soccer Association for which she served as treasurer.