The U.S. U-19 men’s national team, coached by Brad Friedel, beat Russia, 2-1, to win the Slovakia Cup after reaching the final thanks to group-stage wins over Georgia (5-1) and Ukraine (2-1).

In the final, the USA came back after going down 1-0 in the 14th minute with goals by Nelson Hunsinger of of Florida's Leg A-Z in the 15th minute and Pierre Da Silva (Orlando City B) in the 65th minute. Tijuana’s Brandon Vazquez assisted on both goals.

U.S. captain Weston McKinnie, of FC Dallas, who scored against Georgia and Ukraine and was named tournament MVP. 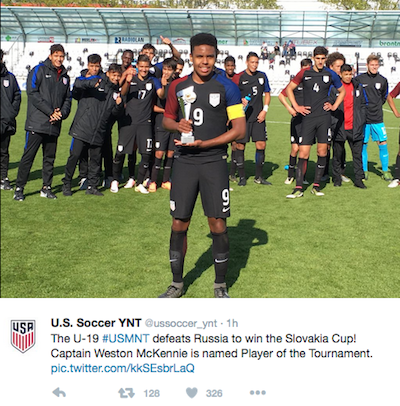