Zinedine Zidane, the making of a coach

"Un coach est né" ("A coach is born") shows how France is waging a losing battle trying to ban the English language.

From the same edition of L'Equipe: "Le jackpot en jeu" ("The jackpot in play" -- a preview of Friday's Monaco-Lyon match for second place in Ligue 1) and "Coach et conséquence" (column about fired Bordeaux coach Willy Sagnol). (My all-time favorite L'Equipe headline from 30 years or ago: "Swimming in the rain" -- about an outdoor swim meet postponed by rain.)

The cover headline also says just how much the French press wants Zinedine Zidane to succeed as coach at Real Madrid. Well, so do his players. 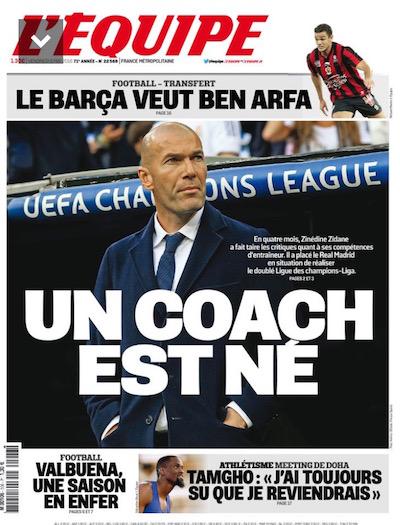 This is Zidane's first big coaching job -- he was previously head coach of Castilla, Real Madrid's B team -- and he already has two feathers in his cap. Real Madrid beat Barcelona -- in Barcelona -- in his first Clasico, and it has reached the final of the UEFA Champions League, where it is looking to add to its record 10 European titles.

While Real Madrid's performance in its 1-0 win over Manchester City was more pragmatic than inspiring, it showed Zidane could lift Real Madrid in difficult circumstances -- Karim Benzema, his best striker, and holding midfielder Casemiro were out with injuries and star Cristiano Ronaldo was not 100 percent after returning from a leg injury -- and his players will listen to him.

Marcelo said afterward Zidane has a brilliant future as a coach. "Zidane has a privileged relationship with each player," the Brazilian veteran said. "He is a natural."

Zidane is famous for never saying much, and that's a quality that can go a long way at Real Madrid, where the local press eats up every word. But he listens, and the players like that, especially Ronaldo, whose tense relationship with Benitez led to the latter's exit after only 25 games.

"He's doing a great job with the team," said Ronaldo of Zidane. "We're all helping each other. It's mutual. I hope he continues. I admire him as a manager and as a person. We've always had Zizou's back, he's humble, he knows how to listen, and that's always important."

The one thing Zidane will have to learn is how to calm down.

He got so excited during the comeback against Wolfsburg in the quarterfinals that his pants ripped -- he now wears a larger size -- and after the Manchester City win he stumbled between French and Spanish at the post-game press conference -- he usually speaks in Spanish. L'Equipe reported that Zidane was so wound up that he didn't sleep Wednesday night.

Not a good thing if he wants to survive as a coach.