Among the four teams’ starters in the second-leg semifinals, Spain was best represented. In addition to the nine from the Madrid teams, Bayern Munich started two Spaniards and Manchester City one.

Spain attracts many of the world’s greatest players -- such as Lionel Messi, Cristiano Ronaldo, Luis Suarez, Neymar -- but provides more opportunities to homegrown players than the other leagues. And Spain is second only to France in exporting players to top European leagues.

This year’s Champions League final is a rematch of the Atletico Madrid-Real Madrid final of 2014 that Real won. With Barcelona’s wins in 2009, 2011 and 2015, the last five out of eight Champions League titles will have been won by La Liga teams. 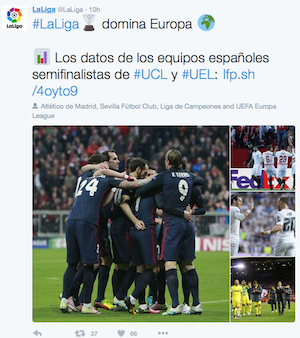 This year’s Europa League (formerly UEFA Cup) semifinals also featured two Spanish teams. Sevilla, which beat Shakhtar Donetsk, and is aiming for its third straight title, and Villarreal, which fell to Liverpool. Six of the last 10 Europa League titles were won by Spanish clubs and Sevilla could make it seven out of the last 11. 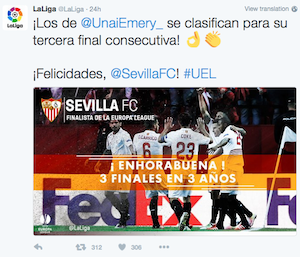 An aging Spain team exited in the first round of the 2014 World Cup but it rebounded to win nine of its 10 games while outscoring its foes 23-3 in route to qualifying for this summer’s European Championship in France.

While it's been an age-old debate on whether too many foreign players in a league create a negative impact on the development of domestic players, La Liga seems to have found the right balance.