Galaxy provides school in quest to produce an American Messi

"This could change how we develop players in this country. And the hope is a Lionel Messi or a Cristiano Ronaldo will come from the United States."

The quote comes from Kevin Baxter of the Los Angeles Times reporting on the Los Angeles Galaxy’s full-time school for its academy players: “The team spends about $4 million annually on player development, including the school and academy programs, about $2 million less than it will pay veteran midfielder Steven Gerrard this season.”

The Galaxy launched its school program last year. FC Dallas started partnering with the Frisco Independent School District in 2010, enabling FC Dallas Academy players outside the district to attend school in Frisco in the afternoon so they could train in the morning, the optimal time for practice in Texas weather but also coordinating the Academy players’ schedule with the first team.

The Philadelphia Union opened a high school -- the YSC Academy in an office complex across the street from its youth development training center -- in 2013. Its second class of seniors is graduating this month. As is the case with FC Dallas, some of the players commute from their homes in the area while a few board with host families.

Real Salt Lake, which already has a residency academy program in Arizona, plans to build a $50-million complex in Herriman, Utah, which in addition to serving as practice facility for the first team, will have its academy players attend classes at an on-site charter school affiliated with Utah State University.

The school setup enables the Galaxy to work with its players for nearly nine hours each weekday -- training, educating and feeding them -- before turning them back to parents each night without worrying about losing them to a school program or one of the many elite youth soccer programs in Southern California, explains Baxter.

"These kids show up every day, they train in a professional environment, they go to school and they're able to get home at a reasonable hour," said Pete Vagenas, director of the Galaxy's academy system. "In the previous model, kids and parents spent whole afternoons driving to and from practice. They would end up eating in the car. Kids now are done [for the day] at a consistent time."

Los Angeles Times: “At the Galaxy's school, soccer is hardly the only subject”

‘EUROPEAN POWER PLAY.’ In Cam Smith’s report on European clubs entering the U.S. youth soccer market, he got the views of Mike Hoyer, Acting Executive Director of AYSO, which has been providing low-cost youth soccer in the USA for more than half a century.

“It’s another waypoint on the development timeline,” Hoyer said. “There are people that will be attracted to that European brand. Will it make for a better soccer experience? That still comes down to the coaching that is delivered in that club. …

“For us, it’s not a big concern. They’re trying to attract parents that will open up their checkbook to any big name that comes in front of them.”

MLS NEWCOMER IMPORTS ACADEMY DIRECTOR. Atlanta United, which begins MLS play in 2017, hired Englishman Richard Money as its youth academy director. Money, who spent the bulk of his playing career with Scunthorpe United and Fulham, also had a stint with Liverpool. As coach, he served in youth programs of Newcastle United, Coventry and Aston Villa, and as head coach of teams in Sweden, Australia and England, most recently Cambridge United of the fourth division. Atlanta United also appointed Georgia United founder Tony Annan as academy manager. …

TAB RAMOS ON PULISIC. In Brian Sciaretta’s interview with the USA’s U-20 men’s national team coach and U.S. Soccer Youth Technical Director, Tab Ramos discusses the surge of young players in Europe, domestic player development, and the U.S. U-23s failing to qualify for the Olympics -- and 17-year-old Pennsylvania product Christian Pulisic, who has had a remarkable run at Borussia Dortmund and is on the Jurgen Klinsmann’s preliminary roster for this summer’s Copa Centenario.

“Will [Pulisic] play for our U-20 national team? Chances are he probably will not. … The U-20 World Cup is [May-June 2017]. Maybe at that moment Christian in a place where he can help the U-20 team. Look, Paul Pogba played for France’s U-20 team when he was starting for Juventus.

“I think it has a lot to do with what the senior national team coach has, what the schedule of the senior national team is, and how we view our program at the moment. If we feel Christian is probably not going to start with our senior team, is not going to get a lot of playing time over the next month, and it is important that we do well with the U-20s and to see how he can do on the world stage with the best players of that age. … So that is why I never eliminate players.

For the U-17 Women's World Cup-bound U.S. team's second camp since qualifying in March, Coach B.J. Snow  has named a 24-player squad to train at the U.S. Olympic Training Center in Chula Vista, Calif., from May 8-14.

Seventeen of the players were part of the squad that won the Concacaf U-17 championship and clinched a spot at the U-17 Women’s World Cup in Jordan Sept. 30-Oct. 21. 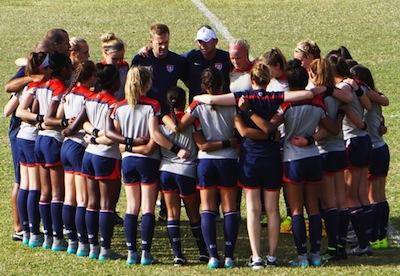 The roster is comprised of 12 players born in 1999, the age-cut for this year’s World Cup, nine 2000s, and three 2001s -- defenders Kennedy Wesley and Kate Wiesner and forward Jordan Canniff, a trio that was part of the Concacaf championship team.

Ashley Sanchez, who led the team with five goals in qualifying, will be playing with the U-20s in coming months.