Soccer's new-look rulebook (Part 1): Much improved but still a way to go

No doubt it was asking too much of ex-referee David Elleray and his colleagues to turn soccer's rulebook, almost overnight, into an easy-to-understand, organized, readable document.

They have, however, made an impressive start on the Augean mess left by the IFAB which, for over 100 years, has been discordantly assembling good rules and bad rules along with afterthoughts, duplications, errors, anachronisms, contradictions, amendments and just plain stupidities.

Yet Elleray et al have been able to introduce some order here, complying with their mission to make the rules “more accessible and more easily understood by everyone in football.” Everyone, please note. To open the rulebook to all, to end its days as a cryptic code book for referees. 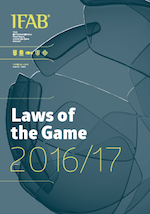 A way overdue revision. It has long been one of the most obvious failings of the IFAB rulebook that it is behind the times, always several years behind what is actually happening on the field. Another prominent trait, a hangover from Victorian days (IFAB was formed in 1886), has been its reluctance to allow outsiders any insight into its workings. A reclusive attitude that has unfortunately been passed on to the entire refereeing community.

But here again, this rewriting of the rules offers hope -- considerable hope. Over 40 pages are devoted to explaining new rule changes. The presentation is excellent -- we get the old wording printed alongside the new, followed by the reasons for the change.

It’s difficult to overestimate the significance of this sudden leap into transparency -- a prodigious jump from the 19th century to the 21st. Whether the IFAB itself is aware of just how far it has gone in torpedoing its own past is doubtful. We are also given a brief “History of The IFAB” which blithely claims that “the IFAB [has] changed the game and the mind-set of those who played and watched it.” Extraordinary. It has been over 100 years since the IFAB did anything proactive in the game.

I am saying, course, what I have said many times before: That soccer would be better off without the archaic IFAB, which should be replaced with a more professional, more knowledgeable, and less Brit-oriented group (four of its eight members are -- by statute -- Brits). 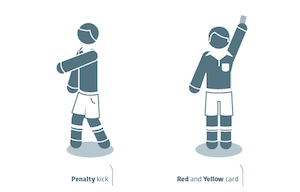 Should you have any doubts about that Brit presence, let me point out that, at the press conference that followed the most recent IFAB meeting last March, the dais featured just four IFAB members . . . from England, Scotland, Wales and Northern Ireland

The Brit influence has been slowly fading. Too slowly -- it was not until 1997 that the quaint phrase “ungentlemanly conduct” disappeared from the rules. Amazingly, at the beginning of this year, the rules were still insisting that players wear “stockings”; only with the rewrite will they at last be wearing socks.

Even so, the loose wording in Rule 12 of the rewrite -- “A scissors or bicycle kick is permissible provided that it is not dangerous ...” -- strongly suggests that the writers think the two terms are merely synonyms for the same action, a gaffe I have heard many times from Brits, whose vocabulary for the more intricate skills of the sport is notoriously inadequate.

I have been persistently calling for a rule change, or at least a modification, that will make it clear that goalkeepers cannot continue jumping recklessly into other players, so I was glad to see, in one of the Explanations, that a reference to “tackles” now reads “tackles or challenges.” The reasoning behind the change is given with exemplary clarity: “‘tackles’ implies a challenge with the foot but some challenges can be with other parts of the body (e.g. knee) and technically were not covered.”

It is with their raised knees that goalkeepers can cause serious injuries, so I see this one-word addition as a significant advance toward taming reckless keepers.

Elleray’s rule revisers are very much aware of the importance of accurate definitions, and have included a 9-page glossary of “football terms” -- another excellent innovation. Given that attention to clarity, it’s baffling to find the word “sanction” used repeatedly (15 times is my count).

Aside from being a word that not many people use, this is also a famously tricky word, one that Bill Bryson pounces on in his superb book “The Mother Tongue” as the prime example of a contronym -- a word that has two contradictory meanings. Sanction, warns Bryson, “can either signify permission to do something, or a measure forbidding it to be done.” Confusion looms where sanction lurks.

My sympathies are with Elleray. He needed a verb to describe what the soccer rules do to players who break the rules. Unfortunately for him the best choice -- “penalize” -- brings with it the threat of yet more confusion, because its associated noun “penalty” already has a soccer-specific meaning.

To avoid the confusion, Elleray opted for the slightly pompous and definitely dodgy “sanction” that does service both as a verb and a noun. But I think punish (and punishment) would have been a better choice.