He took Michael Orozco over Omar Gonzalez, Timmy Chandler over Edgar Castillo and Tim Ream, Perry Kitchen  over Danny Williams  and  Mix Diskerud and Chris Wondolowski over Jordan Morris to get down from 40 to 23 players. He also named Brad Guzan to start in goal over Tim Howard. 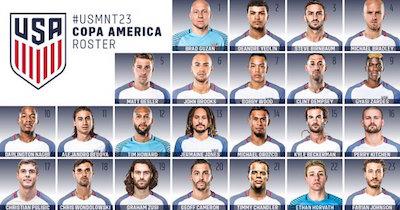 Three players who started as recently as two games ago in the World Cup 2018 qualifier against Guatemala -- Castillo, Gonzalez and Diskerud -- didn't make the final 23. The omission of Diskerud, who has started only seven of New York City FC's 13 games, was not a surprise, but Castillo and Gonzalez are  both playing in Mexico's Torneo Clausura final.

“Obviously when you get down and you decide on the final 23-man roster," Klinsmann told U.S. Soccer, "a lot of people always think about the players that are not part of it. It’s never against a player that is not there. They are very close, tight decisions to make, a lot of 50-50 decisions where you can argue or you can debate who should be on and who should be off."

Klinsmann said he believes he has assembled a very strong roster.

"We feel that these 23 players going into the very special Copa America really deserved to be on the roster," he added. "But it’s not against the players that are not on the roster. You want them all to do well. You want them all to be part of the inner circle, to be part of a big tournament, but at the end of the day you have to make a decision."

Perhaps the toughest choice was for the fourth forward, behind Clint Dempsey, Bobby Wood and Gyasi Zardes, who all started in the 4-0 win over Guatemala in Columbus, in place of Jozy Altidore, who is injured.

"We believe that players really played their way into that [Copa America] roster, and it’s difficult," Klinsmann told U.S. Soccer. "There are some situations that probably the fans will now discuss. Why not Jordan Morris and Wondo is in there? Well, because Wondo proves all the time that he just is so hungry for goals, and Jordan is on his way through the ranks coming up."

Guzan will be the starter in goal after splitting time with Howard in the first four qualifiers.

"That’s been communicated clearly to Tim and Brad," he said. "We believe that Brad deserves it. Brad, throughout the last two years, played very consistently and very solid with us. He had a very tough year with Aston Villa, there’s no doubt it, but he knows that, and for many, many reasons. But it’s also a different environment. Tim Howard finished a huge, huge chapter in his career with Everton Football Club. He’s always going to be a legend for Everton, and he did wonderful things with that club. But he wasn’t with us for a year after the World Cup, and he also lost his starting spot the last half of the year with Everton, so we think that in that moment Brad has a little bit of an edge and deserves it."