The 29-year-old Lahoud, who joined Philadelphia in 2012 after starting his MLS career with Chivas USA in 2009, was loaned to the New York Cosmos this season and started seven NASL games.

ESPN's Taylor Twellman tweeted that Miami FC (backed by MP & Silva media agency) paid $300,000 for Lahoud, which comes after it purchased Richie Ryan from Jacksonville for $750,000, as reported by web site fifty-fifty.one.

“We are happy to have Michael here in Miami,” said Miami FC coach Alessandro Nesta in a press release. “The club is looking to finish the season strong and I think Michael will help us do just that.”

Lahoud, who moved to Virginia from his native Sierra Leone at age 6 and played college ball at Wake Forest, has four caps for Sierra Leone. He has played 122 MLS regular season games. 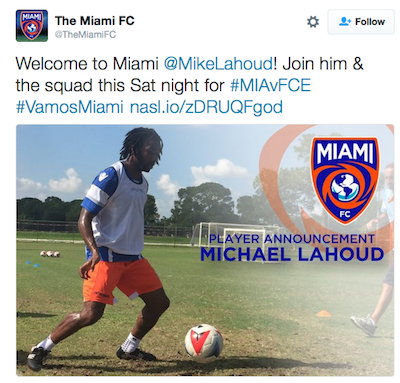