Daniel Karbassiyoon jokes that Arsenal kept him from going to college twice. The first time, at age 18, he signed with the English Premier League club, in 2003, despite being courted by top programs in the ACC and Ivy League. The second time came after injuries ended his pro career at 22 and he had returned to his home state of Virginia.

Karbassiyoon, after a few dark months of contemplating life without soccer, was heading to Virginia Tech. Then came the phone call from Arsenal, offering him a job as the club's North and Central America scout, a position he held until recently moving to London, where he now scouts prospects for the Gunners in England. 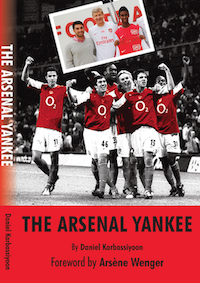 Since Karbassiyoon began scouring the USA for talent, the scouting by foreign clubs of young U.S. players has increased dramatically. It’s one reason why Karbassiyoon wrote the book, “The Arsenal Yankee: A young American's journey from soccer in the States to one of the world's greatest teams.”

“When I was 17, I had no idea what I was getting into and what to expect at a trial, what life was going to be like,” he says. “And when I signed at 18 I certainly would have enjoyed some sort of handbook.”

At age 20, Karbassiyoon achieved what no other American had done before, or since. He scored a goal for Arsenal, a 90th minute gamewinner in a 2-1 League Cup win over Manchester City. Two weeks later, he went the full 90 minutes in a 3-1 fourth-round win over Everton.

But Karbassiyoon, who as a teenager was sidelined for more than a year with a bad knee, couldn’t overcome injuries, and managed to play only 12 more competitive games, at Burnley and Ipswich.

He had, however, left an impression during his time at Arsenal, whose instincts paid off as Karbassiyoon connected the club with an 18-year-old Costa Rican Joel Campbell in 2011 and Gedion Zelalem, who left his Maryland home shortly before his 16th birthday to join Arsenal in 2013.

“I’d watch anywhere from under-13, maybe under-12 sometimes, all the way up to MLS games, senior national team games, World Cup qualifiers, Gold Cup … It was a pretty broad spectrum across a giant region,” says Karbassiyoon. “The Development Academy made things a lot easier.

“For the most part I was focused on younger guys who have European passports and were good enough to come over.”

The European Union passport is crucial, otherwise European teams can’t import players before age 18, and in the England’s case, non-European Union players must meet the rigorous requirements of a UK work permit. Karbassiyoon himself was able to sign for Arsenal because he had dual American and Italian citizenship, thanks to his mother. 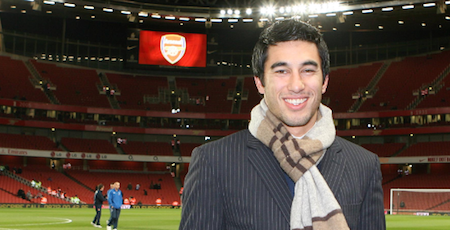 “I would see a lot of talented players that maybe I would have brought over for a trial, but they didn’t have [EU] passports,” he says. “A kid like Gedion ticked all my boxes on the soccer side and also had the German passport. It was just a much easier transition.”

Karbassiyoon heard of Zelalem as he did about hundreds of players, through a coach who contacted him. In the case of Zelalem, who moved from his native Germany to Maryland at age 9, it was Olney Rangers coach Matt Pilkington.

“Unfortunately, 99 percent of the leads won’t be good enough,” Karbassiyoon says. “I try to do my best to -- it’s hard to respond to absolutely everybody but I use my network to ensure I’m not missing anybody, especially if someone sends me a message that says this boy I know who plays for X team in L.A. and he’s 14 years old -- I’ll for sure make phone calls to people I know out there who know what he’s like, as opposed to just the word of a guy who sent me a Facebook message.

“Video has become so accessible and so commonplace that if I hear there’s a there’s a boy with European passport who's lighting it up, ‘send me a video.’ If the kid does seem interesting, then I'll contact the guys I know either in that region or people I know who might know a coach of his.”

Karbassiyoon says Arsenal never put a number on how many players he was expected to recommend: “But there is pressure, especially if rivals continuously sign guys who end up being successful. A lot of these other clubs are also interested, so players are leveraging clubs against clubs.”

The key for him was making the right call on whether a player was worthy of a trial.

“The standard we have and maintain at the club is very high,” he says. “If the kid does excite you, often you’re calling once a month or once every couple weeks the coach or parents and seeing how’s he’s developing, how he’s coming along.”

In the case of Zelalem, Karbassiyoon watched him in training “three or four times, four or five games, all before the Dallas Cup. At that point, we arranged the trial.”

The way an Arsenal trial works is the player gets a fitness test to get a baseline and becomes a member of his age group for a week or two, and training everyday.

“With Gedion, he started with the 16s, got bumped up to the 18s, and for the last days trained with the U-21/reserves,” says Karbassiyoon.

One imagines it can be a daunting task to impress at a trial where your “teammates” know you could be taking their spot.

“It’s a very strange dynamic because you’re there to take someone’s job," he says. "When I went on trial, the other players immediately asked what position I played. When I said ‘forward,’ and the player asking is a forward, he’s suddenly not as warm as he was 15 minutes ago.”

But Karbassiyoon says that players sabotaging a trialist’s performance isn’t the norm:

“I wouldn’t say so. For example, if I have the ball and trialist is open and he’s the best option, it’d be stupid of me to go out of my way to make a bad decision on my own part to make sure he doesn’t do well. It plays out naturally. They’re all trying to be as efficient on the ball as possible and do their best and impress the coaches.

“To go out of your way to make another guy look bad, you don’t see it often. I may have seen it, a player going a session without getting a pass, but at a state or regional tryout, not at Arsenal.”

In deciding whether a player deserves a trial, the scout must also judge the player beyond his soccer skills:

“How will he deal with adversity? If you’re bringing in a kid from Southern California, he’s used to 350 days of sun and in London you’ve got cold and rain and more rain. It gets dark early in the winter and the food’s different and the kid's away from his family. How they deal with situations that aren’t comfortable is massively important. If the player doesn’t work out, you have the club selling him at a loss.”

On how U.S. soccer talent has evolved, Karbassiyoon says, "Certainly the overall level has increased, even since I started scouting [in 2007]. The next step is starting to create those very, very special players who world powerhouse countries create."

For young American players who are courted by foreign clubs, there’s the daunting decision of whether to move abroad, or pursue a career in MLS, or get a college education.

Karbassiyoon was an excellent student. Stanford was another college that courted him. His parents, both chemical engineers, met in grad school. His brother is a computer engineer. How would he, if one day he had son with an option between going pro or college, advise?

“I am kind of the poster child of, ‘You could get injured,’” he says. “But I think I would handle it like my parents did and leave the decision up to the boy. I was just as passionate about soccer as I was about getting good grades. I realized at the time that I could always go back to school, but I would never have the chance again to play soccer at that high a level.”

Karbassiyoon hasn’t gone back to school, but it’s worked out well for him.

“The sport has opened door after door and presented me with more opportunities than I could have ever imagined,” he writes in “The Arsenal Yankee.” “Of course, things may not have worked out the way I’d wanted them to from a playing standpoint, but I have no regrets and will always look back fondly on my time as a young kid trying to navigate my way through England’s incredible football world. … Though I’ll never be able to do some of the things I’d set out to do in my youth, I still use that belief and confidence across all facets of life.”

“The Arsenal Yankee: A young American's journey from soccer in the States to one of the world's greatest teams.” By Daniel Karbassiyoon (2016) $19.99