In its third international tournament of the year, the U.S. U-17 boys national team finished runner-up at the AIFF Youth Cup in India, which will host the 2017 U-17 World Cup for which Coach John Hackworth team's aims to qualify.

A free-kick goal with six minutes left in overtime gave South Korea a 2-1 win in the final that saw the USA play the final 65 minutes a man down and still outshoot the Koreans, 11-10.

“The whole thing was unique,” said U.S. coach John Hackworth. “Three Asian teams, an African team and us. So it definitely gave them some very different perspectives in terms of style of play, but also culturally in that environment. The way they structured and organized the tournament is a little different. We want to be back there in a year to play in the World Cup, so it was a perfect opportunity for us."

The final was a rematch of a 0-0 tie between the two teams in group play of the tournament in which the USA notched wins over Malaysia and India and tied Tanzania.

Andrew Carlton (Georgia United) equalized for the USA -- on the rebound of his saved penalty kick -- 17 minutes after the Koreans had taken a 1-0 lead in the 15th minute. But a red card to George Acosta in the 55th minute after an off-the-ball incident had the USA playing short-handed for more than an hour in 95-degree heat. 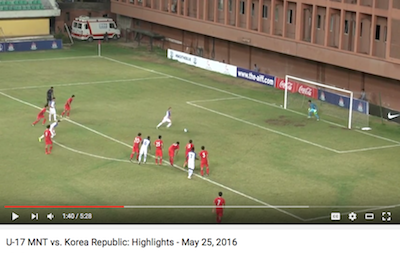 According to the India Times, “Had it not been for the player disadvantage, United States could have probably nicked it in regulation time itself. They were clearly the better side and, despite the early setback, were in control of the proceedings.”

The U.S. U-17s have reached final of all three tournaments they’ve taken part in this year. In January, the USA fell to host Turkey at the Aegean Cup. It beat host France to win the 44th International Montaigu Tournament in March.

“Out of our five games, we had to play three of them at 4 o’clock in the afternoon when the coolest temperature for the start of a match was 100 degrees,” said Hackworth. “It was oppressive heat and humidity. The most I’ve ever been experienced in soccer. But our team was fit and that spoke to our conditioning and our mental aspect. …

“I was very proud of my team after the entire tournament because I thought we were the best team there in terms of our style of play. I thought we had to deal with a lot adversity, both from a cultural standpoint and on the field. Many different things were thrown at us. I was proud that the guys were down a man for over an hour and did well. There’s a lot of good things to take away. We’re still disappointed in terms of the overall result because we felt we were the best team there. … But there were really valuable lessons for our team to learn from.”

Ella Stevens  of Grayson, Georgia, was named 2015-16 Gatorade National Girls Soccer Player of the Year, becoming the second player from the Peach State to win the award since its inception in 1998. 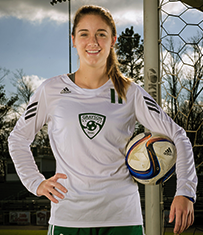 Stevens, who is headed to Duke, finished her high school career at Grayson High School this year with 74 goals and 84 assists. She played for the USA during its successful qualifying campaign for the 2016 U-20 Women’s World Cup and was recently called in to the U.S. U-19 women’s national team camp.

Stevens has played ECNL ball for GSA since 2011 this season has five goals and nine assists for GAS.