Spaniard David Villa, New York City FC's top player with 27 goals and eight assists since the club arrived in MLS in 2015, scored a brilliant goal to give NYCFC a 2-0 lead but failed to make it 3-0 by falling on his backside trying to convert a 70th-penalty kick. Instead of bouncing back from last week's humiliating 7-0 loss to the Red Bulls with a win, NYCFC settled for a 2-2 tie. 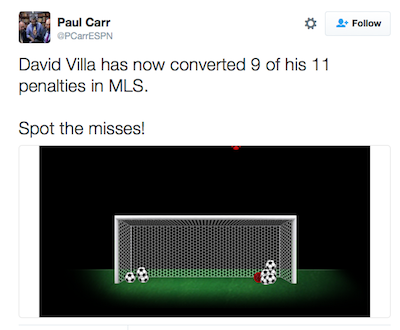 Yankee Stadium should dedicate the seat David Villa's penalty landed in forever. No one but he sits in it pic.twitter.com/87tWosLzM1