Paul Pogba is going to be the face of France as the host nation of Euro 2016 is one of the favorites this summer, but the kid from the suburbs of Paris didn’t get there by accident, and American teen Christian Pulisic  could do worse than to follow his lead.

From afar, Paul Pogba and Christian Pulisic don't appear to have much in common. Pogba is already established as one of the world’s biggest stars, a French central midfielder blessed with size, strength and physical gifts envied by even the most talented players. The American teenager is an attacker who has yet to play a competitive game with the U.S. national team, with his lack of size seen as one of his few shortcomings. 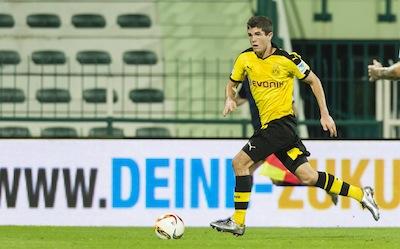 Pogba is known for flashy sports cars, Pulisic is known for being driven by his father Mark to practice in Germany (where you must be 18 to drive).

One would never have to hear Pogba speak to wonder if he's brimming with confidence, as almost everything the Juventus star does suggests "I was born to do this, to have all the world's eyes trained on me."

While Christian's haircut is standard fare, Paul updates his millions of social media followers after excursions to the barbershop for his latest escapades into hairdos (and many more hair-don'ts).

Pulisic has allowed his personality to show little by little, while his humility off the field is not always apparent on the field, which is a good thing, displaying confidence with the ball at his feet, always assuming his first touch will be pure, or even the subtle arrogance demonstrated when he's dribbling at opponents nearly twice his age.

And if you're able to see past Pogba's garish outerwear and his playful nature, you'll find an extremely loyal teammate, one who has made sound, almost impeccable, choices when it comes to managing his career, and developing his game.

They are entirely different players, and obviously different people, but Pulisic and his family have already made terrific choices helping him flourish, as a player and a person, passing up the opportunity to jump to Europe sooner, choosing Borussia Dortmund, a club with a rich tradition of developing younger players.

Soccer's annals are littered with tales of players who never reached their potential; Pogba is the rare prodigy who appears to be reaching his. When the masses descend upon France over the following month, Pogba will be ready for it, in large part due to the bold choices he's made with his club teams, choices that were often second-guessed at the time.

When Pogba left Manchester United in the summer of 2012 it was not the struggling United we know now, Man U won the 2008 Champions League final, was runner-up in 2009 and 2011, and the club had also won four of the previous Premier League titles. Pogba was a youth player considered a star of the future -- one with only three substitute EPL appearances to his name -- told by Alex Ferguson to wait in line and then it would be his turn. Pogba decided his time was now in 2012 and left for Juve, where immediately became a fixture in midfield, learning from some of the world’s best -- on the job.

Pogba, now 23, also realized his career was only beginning, so instead of chasing the money and huge clubs that were knocking on his door the last couple seasons -- obviously Juventus is a big club, but every team in the world wanted him -- Pogba chose to remain at Juve, a decision that was made even tougher last summer when Juventus turned over much of its roster after losing to Barcelona in the Champions League final last year.

Knowing there would be little chance this Juve team would compete for the Champions League title, Pogba chose to stay in Turin, assured he would have a larger role to play in distributing the ball and being involved in the attack -- while growing as a player.

And one year later, after winning his fourth Serie A title in four years at Juventus (of the club's five straight), having resisted temptation, Pogba enters Euro 2016 as an even more formidable player, one who tied for the Serie A lead in assists this season.

It would be hard to think of a better career path that Pogba could've chosen to prepare him for this summer than learning beside Arturo Vidal and Claudio Marchisio in midfield for three seasons while watching his idol Andrea Pirlo manipulate opponents, prior to this season where he spread his wings -- a season where Pogba played poorly initially while doing so, with Juve nearly giving away the title, before finding his footing, a fourth title, and himself.

These Euros will see a much better player than they would had Pogba stayed at Man United, or chosen to leave Juve last summer without this year of individual development. On Monday, Pogba whipped in this ridiculous pass in France's friendly with Cameroon.

Stunning cross by Pogba for Giroud's goal last night. He is some player pic.twitter.com/lJtQ9OsKRF

Of course, Pulisic is not Pogba, and even though Christian has already played more first-division soccer at this stage in his career than Pogba had at this point, the Frenchman's star was already glowing bright enough for all to see.

At just 17, it’s possible that Pulisic is already the most technically gifted player on this current U.S. team. Pogba didn't even debut for France until he was 20 years old, that is obviously much more about France’s talent, but all things are relative, and even at such a young age, having not accomplished nearly as much, Pulisic is more likely to become the greatest player in his country's history than Pogba, a young man walking in the giant footsteps of Zinedine Zidane, Thierry Henry, Michel Platini etc.

Each case is different, but finding the right fit, style, and whether a player is featured at his club is immensely important in player progress. Bayern Munich is practically pushing Mario Goetze out the door right now, even though he's still an important part of Germany's national team, Goetze's progression has stagnated since leaving Borussia Dortmund, the same is true of Isco, once "the future" in Spain but now a role player at Real Madrid after leaving Malaga, and Vicente Del Bosque left Isco off his final Euro 2016 selection on Tuesday.

In my mind, the best 11 Jurgen Klinsmann could put on the field at this year's Copa America Centenario would clearly have Pulisic in it -- but would that help us see the best Pulisic for the USA in 2018, in 2022, or even in 2026, when Christian Pulisic will still be just 27 years old?

I do know this, Pulisic appreciates all the support, but this recent interview made it clear he's also just a 17-year-old kid who likes bad music (Justin Bieber), a privilege of youth he should not be denied, and he’d like to remind us all that he doesn’t want to forfeit his teenage years just because he’s awesome at soccer.

Christian Pulisic makes himself heard in this piece for @FourFourTwo by @JonBloggs66. #BVB https://t.co/02vDgWRBgf pic.twitter.com/iQfbou0Enu

Regardless of how well Pulisic plays this summer, and I would expect him to be somewhere between good and great, when he returns to Dortmund this fall he's only going to be the second best teenager on the team, as Dortmund signed Ousmane Dembele recently, a 19-year-old French attacker who is elite at many of the things that Pulisic does well, one who was pursued by Barcelona, among others.

This will almost certainly be a good thing, with another season where Pulisic can play and train with some of the world’s best players on one of the world’s best teams while fulfilling a role. He’ll start some games, he’ll come off the bench, he may even play with the U-19s to stay sharp, all while getting better, and perhaps reassess his situation in a year’s time.

Pogba made terrific choices throughout his journey so that when he was in position, now, many years later, he would be ready for the burden of expectations. We’re all hoping that Pulisic will be in that position several years from now, but for now we should allow him to do what’s best to find that path.

There are bound to be American fans who may forget becoming great is a journey, Pogba didn’t lose sight of that, and I wouldn’t expect Pulisic or his family to lose sight of it either.