The Beautiful Game appears at the Copa Centenario

It was a Brazilian who called it such, but thank Argentina and Chile for delivering “the Beautiful Game” to the Copa America Centenario, to the delight of 69,451 fans in Santa Clara, California, on Monday.

Pele recently lamented that his own nation had become incapable of jogo bonito under Coach Dunga. That certainly seemed the case when Brazil opened its Copa campaign Saturday with a scoreless tie against Ecuador in Pasadena.

But Argentina and Chile -- they dazzled. Stats don’t tell the whole story, but these stand out: Argentina completed 89 percent of its passes and Chile 88 percent. In total, the two teams successfully passed 770 times, while playing at high speed, attacking in waves, providing end-to-end action.

The Argentines, even while up 2-0 after Angel Di Maria’s 51st minute goal and Ever Banega’s 59th minute strike, played as if they really needed a third goal. They didn’t because the game ended seconds after Chile’s Jose Pedro Fuenzalida three minutes into stoppage time.

Argentina avenged its loss in the final of the Chile-hosted 2015 Copa America, a year after Argentina fell, 1-0, to Germany in the 2014 World Cup final.

Before the 2015 Copa America, Coach Gerard Martino said, “It would be unforgivable if this generation of players did not end up winning a title.”

Before this Copa, Martino said Argentina desperately needed to end its title drought that started after winning the 1993 Copa America, for the sake of the next generation of Argentine players, so they don’t have to always play under the pressure of the burden. 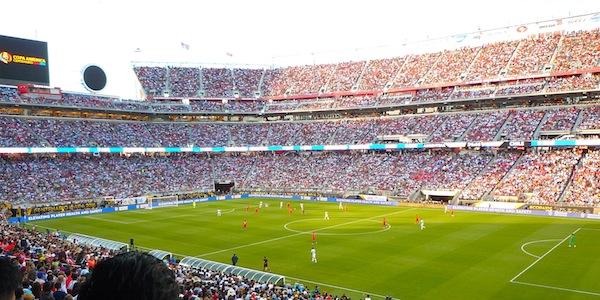 Argentina and Chile entertained 69,491 fans in Santa Clara, California, a crowd 23,000 larger than at the 2015 Copa America final in Santiago, Chile.

Since winning the 1986 World Cup and the 1991 and 1993 Copa Americas, the Argentines have entered pretty much every tournament as a favorite. And something always went wrong.

The brilliant Di Maria, who also assisted on Benega’s goal after Banega assisted on his on Monday, limped off the field of the 2015 Copa America final in the 29th minute and Argentina fell in penalty kicks after a 0-0 tie.

Di Maria missed the 2014 World Cup final with an injury and Sergio Arguero was a walking wounded when he came on late against Germans. Argentine coach Alejandro Sabella had left Carlos Tevez, who scored 19 Italian Serie A the previous season, off the roster. And boy could he have used him after Di Maria and Arguero got injured.

“The 2014 World Cup final, Argentina had chances to win,” says reporter Antonio Serpa of Argentine sports daily Ole. “But Germany had beaten Brazil, 7-1, in the semifinal. Finishing second to that German team wasn’t seen as a failure.”

The 23-year long title drought included two other Copa America runner-up finishes and a quarterfinal exit at the 2006 World Cup, during which Argentina looked the best team of the tournament until falling to host Germany in the quarterfinals on penalty kicks -- after losing its goalkeeper to injury in the 71st minute, Coach Jose Pekerman subbing out the brilliant player Juan Roman Riquelme in the 72nd while up 1-0 and keeping Lionel Messi on the bench.

Argentine fans cite coaching decisions, injuries and bad luck among the reasons for La Albiceleste’s failure to win a trophy despite producing more world-class talent than any other nation.

That talent was on full display against Chile – but not all of it. The Argentines will only get better as Messi, Martino assured, is recovering from his back injury and will be back on the field soon.