With Euro 2016 kicking off on Friday, soccer balls may be flying back and forth across the Atlantic, as the largest European Championship in history will be played concurrently opposite the 100th anniversary of the Copa America.

Euro 2016 will begin and end at the Stade de France just outside Paris, where France will host Romania in the opener Friday. The first-ever Euro began and ended in Paris at the Parc des Princes in 1960, with that final also played on July 10.

On Saturday, Sunday and Monday there will be three games from Euro 2016 in France and two games from the Copa Centenario in the United States -- fortunately for soccer junkies, time difference and scheduling makes it so none of these games will overlap.

This summer's European Championship is by far the largest ever. With an increase from 16 teams to 24 countries the total number of games played leaps from 31 to 51 matches, extending the knockout rounds from a final eight to a round of 16. There are six groups of four, with four third-place teams qualifying for the knockout rounds using results from different groups. Four group winners play third-place teams, two group winners play runners-up, while the other four runners-up get to play one another. (This is actually the exact same format used at the 1986, 1990 and 1994 World Cups, but without a third-place game).

Initially, I was opposed to the expansion, thinking they would water down the qualifying (which proved to be exciting), but now I've come to appreciate smaller countries, and their fans, having their time in the sun. While less meaningful group-stage games may allow the heavyweights to work the kinks out with less pressure, or even play less tentatively in group games -- as Argentina and Chile did in a thrilling Copa America clash on Monday -- so perhaps we’ll all get to see Europe's best at their peak in the knockout rounds. 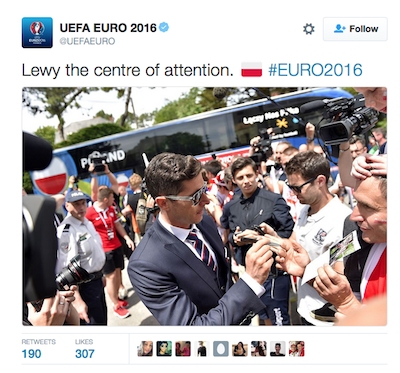 The field. There are five favorites below, so at least 11 of the teams in this year’s knockout rounds aren’t going to be among them, and there’s a decent chance we may see a winner coming from outside the favorites, if that happens it would probably be one of the following:

In a down period, and without Marco Verratti and Claudio Marchisio, Italy can still never go without mention. Portugal must also be included, with Cristiano Ronaldo always eager to celebrate his next penalty kick. Croatia and Austria were impressive in qualifying, and there’s also Wales, Russia, Switzerland and Zlatan Ibrahimovic’s Sweden. Poland looks quite dangerous, with Robert Lewandowski and Co., almost toppling Germany in its qualifying group -- so perhaps we should expect at least one non-traditional semifinalist in this new format.

Playing favorites. In October I shared my way too early power rankings, which haven't changed a great deal for the longer shots, but there has been a reshuffling at the top.

5. Belgium. After Belgium rose to the top spot in FIFA's rankings last fall I wrote an entire article about why people should fear the Red Devils, particularly in the future with this squad being so young. Belgium's chances this summer took a hit due to two reasons. Captain Vincent Kompany is injured and will miss the tournament; his enormous presence may me missed more by this young team than his defense. Eden Hazard, last year's Player of the Year in the Premier League, had an absolutely disastrous season at Chelsea, and with Kompany gone the captain's armband falls to the mercurial 25-year-old, who would not be my first choice to lead any team.

Regardless, Belgium is still loaded and if it can solve its chemistry concerns few other countries can match its bevy of stars, including Kevin DeBruyne, Romelu Lukaku, Yannick Carrasco, Axel Witsel, Toby Alderweireld, Mousa Dembele, Radja Nainggolan and Thibaut Courtois in goal.

4. England. I feel obligated to preface the following flattery with this context. I loathe the influence that the Premier League, English broadcasters, pundits, or even U.S. players who played in England have over how soccer is delivered to, and digested by the world. Soccer is dispensed to all of us through a British lens, it's pervasive, almost inescapable, and their trite statements of "fact," which are often no such thing, are repeated time and again while nascent soccer fans are indoctrinated with inaccuracy.

I believe U.S. soccer does itself a disservice to fawn over the great television and alluring lilt the Premier League provides while overlooking the fact that English soccer on the field has been a train-wreck waiting to happen for years. "They" lecture all of us about how the game should be played, while the Premiership is the only top league in Europe that hasn't adopted officiating standards that fall in line with those emphasized by FIFA and UEFA, finding English clubs and its national team woefully underperforming while complaining about "niggly fouls" hampering their rugby, as they ignore the long-established reality they pretend doesn't exist.

Having gotten that diatribe off my chest.

I think England has as good a chance to win Euro 2016 as it has had at any major tournament in quite some time. It's not that this is the most talented Three Lions team ever, it's not, but the ridiculous expectations that are regularly thrust upon England and its players have been tamped down from ludicrous to outsized. More importantly, I think the word "team" quite suits this England squad, which has rarely been the case.

This is not a collection of aging stars, or actual stars with little chemistry, it's a collection of quality pieces that complement one another. Few teams at the Euros can match England's top strikers, Jamie Vardy and Harry Kane, who offer coach Roy Hodgson flexibility, Vardy’s speed complements Kane’s traditional strengths. Hodgson also has 18-year-old Manchester United sensation Marcus Rashford as an option.

There’s Daniel Sturridge, Raheem Sterling, Dele Alli, the experience of Wayne Rooney, with Chris Smalling and Gary Cahill in back. But again, the biggest reason I think that England has a real shot to mark the 50th anniversary of their only major tournament win by lifting the trophy in Paris –-- is because perhaps for the first time I can remember, the sum of its parts may prove greater than its considerable talent.

3. Spain. It’s hard to get a finger on the pulse of La Furia Roja, which has returned to the possession and control that made Spain the European champions in 2008 and 2012, but was somewhat abandoned when Vicente del Bosque lost his mind and brought Diego Costa to the 2014 World Cup. The Brazilian-born striker has been left out, offering opportunities for strikers like Alvaro Morata, Aritz Aduriz and Nolito.

The midfield depth is typically impressive, though not at the level of Spain's title European champions in 2008 to 2012 (which perhaps no team has ever been). Andres Iniesta, David Silva and Sergio Busquets are fixtures in midfield, there’s also Thiago Alcantara, Koke, and Cesc Fabregas, with Jordi Alba, Sergio Ramos and Gerard Pique familiar faces in back. Many in Spain are hoping del Bosque makes the difficult choice to bench longtime captain, and legend, Iker Casillas in favor of David De Gea in goal. Casillas had a disastrous season at Porto after being jettisoned by Real Madrid.

Spain has lost the aura of invincibility it had before, but come tournament time, opponents often have trouble adjusting to the fact they're rarely going to touch the ball, and if Spain can find some goals, La Furia Roja remains formidable.

2. Germany. I gave Germany the benefit of the doubt in my last power rankings by keeping the world champions at the top, but there is still no sign that the team we were all in awe of when they sliced through the opposition in Brazil will return.

The international retirement of Philipp Lahm is suddenly a bigger issue, as Germany has real concerns at the outside back positions, it doesn't have a single striker anywhere near his prime, and with injuries to stars like Ilkay Gundogan and Marco Reus (who both missed the World Cup as well), it may surprise you to hear that Tuesday's ACL injury to central defender Antonio Rudiger may be even more of a concern for Joachim Loew, as Roma man was slated to start Germany's first game, with Mats Hummels nursing a short-term injury.

Mario Gomez, at 30, who is now at Besiktas in Turkey, is probably the team's top pure striker, and Loew has experimented with Mario Goetze in a "false nine." While Thomas Mueller could play there, what makes him so dangerous is that he produces tons of goals, while still fulfilling his duties outside.

In the summer of 2014 it seemed we were entering the "Germany era," but Loew is going to have to be creative to conquer Europe, and you won't find many many outside Germany feeling sorry for Loew, who still has Mesut Ozil, Toni Kroos, captain Bastian Schweinsteiger, 20-year-old winger Leroy Sane, and if all else fails, he can just ask Manuel Neuer to play in midfield.

1. France. This is far from an original choice as France is the host nation, betting favorite and Les Bleus seem to have a little bit of everything.

Spain and Germany probably have the most technically gifted midfields in the world; no country can toss a pair of central midfielders on the field like Paul Pogba and Blaise Matuidi. Inexhaustible, loping from box-to-box, Pogba has style and grace aplenty, but those who don’t see him play criminally underrate Matuidi. If Didier Deschamps starts Leicester City star N'Golo Kante in defensive midfield behind that pairing -- good luck getting a ball through that midfield.

Lassa Diara suffered a late injury after a great season, and an injury to Raphael Varane hurts the defense, while left back Patrice Evra is painfully slow in recovery.

France has one of the most in-form attackers in Europe with Antoine Griezmann, he has some lighting quick youngsters around him in Anthony Martial and Kingsley Coman, and the ingenious Dimitri Payet was exceptional at West Ham this season. Olivier Giroud isn't quite as good as Karim Benzema (left off the team for an off-field scandal), and Giroud may not start, but he has Benzema’s qualities, and can be brought off the bench as a target man.

This year’s Euros could easily see a quarterfinal where it feels like five or six different teams could raise the trophy, but when it's all said and done -- I'm predicting all of France will be singing Les Bleus.

Dream Team. UEFA named an all-time starting Euro starting 11 before this year's tournament after an online poll, which obviously leans toward younger fans, but you could do worse than rolling out the ball with these guys on your side.